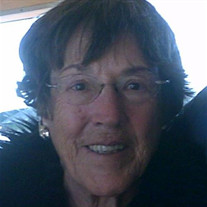 ELIZABETH "LIZ" (BRENNER) YOUNGGREN Elizabeth “Liz” Brenner Younggren, native of Horse Prairie and loved mother, grandmother, and wife passed away Saturday April 27, 2019 in Dillon, Montana while bravely living with acute rheumatoid arthritis. Liz was born in Butte, Montana January 8, 1941, the only child of Jack S. Brenner and Frances Ford Brenner. Liz grew up on the Lazy E4 Ranch where she was raised like siblings with her cousins Bill James, Robert Alexander “Sandy” James, Kate (James) Kajin, Julie James, and fellow prairie neighbors and children. She enjoyed natural sciences, animal care, art, and life on the prairie. Liz’s love of science blossomed into a passion for geology. After graduating from Rowland Hall in Salt Lake City, she attended and graduated from Wellesley College with geology degree in hand and adventure in her heart. She and a dear college friend traveled around the globe after graduation. From there, Liz moved to Denver, CO to start her professional career as a geologist for the United States Geological Survey. While at the USGS, Liz worked on many field investigations including examinations of known and suspected lithium occurrences in the western US. Her professional work after the USGS years was varied and extensive; she owned and operated X-Min Analytical Lab, providing x-ray diffraction analyses for industry and government clients. Liz evaluated and promoted numerous mining properties in southwest Montana including the Chinatown gold lode and placer project, Argenta District properties, the Tamarack mine in the Tobacco Roots and zeolite deposits on Grasshopper Creek, to name a few. For more than three decades, interwoven with her professional work and ranch work, Liz devoted countless hours to Tobacco Root Geological Society, serving as an officer, director, scholarship committee member and contributor to Northwest Geology. Throughout her life Liz continued her interests, education, and work including attaining her gemology certification from the Gemology Institute of America, and recently publishing the Geology of the Coyote Creek Quadrangle with JoAnn Sherwin, as part of the Montana State Map program. In her personal life, Liz was always up for a night of video poker and a beer, and she was a gentle soul who loved animals - she even had a pet deer named Oswald as a child. She volunteered when possible, most recently for the Republican women’s club of Boulder City, Nevada. Liz enjoyed life-long friendships and considered her friends family. Liz was a steadfast wife to Tom Younggren, married since 1983. She was a proud mom of son John B Tourtelot and daughter-in-law Dianne; daughter Frances G Tourtelot-Stone and son-in-Law Kenneth Stone; step-daughter Beth (Younggren) Glassman (deceased) and son-in-law Dan Glassman; and step-son John Younggren. Liz was also a proud grandmother of Treysen Tourtelot, Chelsey Tourtelot, Lyla Tourtelot, Shana Glassman, and Benjamin Glassman. Celebration of life services are planned for Friday, May 24th at 1PM in Boulder City, NV and on Sunday, June 30th at 1PM at the Sacajawea Memorial Area at Lemhi Pass, MT. If you plan on attending, please send a message to [email protected] Condolences for the family may be shared at https://www.brundagefuneralhome.com/.

The family of Elizabeth Brenner Younggren created this Life Tributes page to make it easy to share your memories.

Send flowers to the Younggren family.