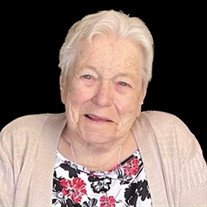 Eleanor M. Brush age 96 of Dillon MT. passed away on 3/26/2022 with her children by her side. She was born on March 24th 1926 in Spokane Washington to Winifred M. (Hughes) Lohr and Alvin J. Lohr. She was the first born of 5 children and the last of them to pass on. Eleanor is survived by her children Michael C Brush and Linda (Daniel) Navarro. Her brother in-laws William (Elaine) Rohr, and Fred (Lucille) Allen and her sister in-law Sally (Charles) Lohr. Grandchildren: Tina (Rich) Zitzka, Anastacio (Saraya) Navarro, Brenda (Joe) Brush, Benjamin Brush, Ian (Sara) Brush, Jordan Brush, Joey Brush, Johnnie Gail Brush, Carol Ann Maye, Sonny Maye.Numerous Great Nieces and Nephews and Great Grandchildren (all of whom she adored with all her heart). Nieces: Arleen (Gina) Rohr-Quinn, Sherry Rohr, & Cathy (Dane) Dancliff .Nephews Ron (Tami) Nelson and Bill Rohr. She loved telling childhood stories of her brothers and herself playing and running wild and free. Her father was a coal miner and later an engineer for the Union Pacific Railroad. They lived wherever there was work to be found. St. Joe Forest in Idaho (always referred to as “The Hoodoo’s”) and Butte Montana were her fondest memories.When she was just a girl of 17 yrs. She moved from Butte to Seattle and got a job at Boeing Aircraft as a riveter during World War II. It was there that she fell in love with and married her boss Joseph R Brush (deceased). They moved to Irving Texas to raise a family. They had four children: Joseph R Brush Jr., Katherine M (Brush) Maye (deceased), Michael C. Brush and Linda R E (Brush) Navarro. While living in Texas, Eleanor became a Red Cross Swim instructor and went to school to get her nursing degree, she worked at Platner hospital before giving up her career to become a full time housewife and caregiver to her sister in-law and mother in-law. After her husband Roy passed away in 1965 she moved to Pocatello, Idaho to finish raising her two youngest children near her family. She worked many jobs to make ends meet and later became a Motel Manager in order to be able to work and be at home for her children. She sacrificed many things in her life to provide for them, but never considered it sacrificing. There may not have been a lot of money but she made sure that there was always an abundance of love. She eventually quit her job to help her sister take care of their Mother. In 1984 she moved to Dillon to be closer to her daughter and her family. She forged many friendships along her way. She belonged to TOPS, The Red Hats, the YMCA and St. Rose Church. She was always on the go somewhere. She spent her lifetime caring for others. She gave her love unconditionally and always had a hug and an “I Love you” for everyone. We miss you so Mom, G.G, Aunt Eleanor (May May) always and forever.

Eleanor M. Brush age 96 of Dillon MT. passed away on 3/26/2022 with her children by her side. She was born on March 24th 1926 in Spokane Washington to Winifred M. (Hughes) Lohr and Alvin J. Lohr. She was the first born of 5 children and the... View Obituary & Service Information

The family of Eleanor M Brush created this Life Tributes page to make it easy to share your memories.

Send flowers to the Brush family.