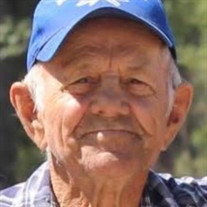 Eldon Glen Voss 1938-2021 Eldon Voss passed away peacefully as the sun was rising on the morning of Monday, June 28, 2021. He was surrounded by his family sharing memories and funny stories and certainly kept the Barrett Hospital staff in Dillon entertained and on their toes. He was the fourth of five children born to Henry “Sonnie" and Marjorie (Johnson) Voss on September 5, 1938, in Ainsworth, Nebraska. He graduated from USNA State High School for Rural students the “Curtis Aggies” in Curtis, Nebraska. During his time there he was involved in all aspects of agriculture and enjoyed playing sports. He met and married Faye Janice Metzger, the mother of his four children. Eldon's first employment was in ranching and eventually began working for South Western Bell Telephone company in Kansas, where he spent 10 years cultivating his love of being a lineman and climbing poles. The lure of the North led him and his family to Montana where he started a construction business which lasted over 40 years. During that time he did construction projects that brought him to Alaska and Washington, this allowed for many friends and great adventures. Eventually, he came back to Montana and called the Helmville Valley and community home for 22 years. Family brought him to Dillon, where Eldon became a loved neighbor and friend to many. The community of Dillon embraced him through his work at the YMCA and his volunteer services with the Beaverhead County Food Bank. You would find him at Safeway picking up food for the food bank multiple mornings a week in his big old Cadillac. Additionally, Eldon would lend his skills to a number of small projects. When he wasn’t volunteering and being a handyman he was caring (spoiling) his variety of backyard barnyard critters. Eldon was preceded in death by his parents Sonnie and Marjorie, his sister Arlene Ries, and his son Todd Voss. He is survived by his brothers: Jerry (Doris), Darwin (Ruth), Kayo (Syd), brother-in-law Jr. Ries, and daughter-in-law Suzanne Voss; children: Monte Voss, Traci Bignell, Mitch (Tara) Voss; grandchildren: Tyler Voss, Alice (Chris) Morrow, Zach Voss, Tallon (Jessi) Voss, Paxton Bignell, Warren Bignell, Scout Voss, Larkin Voss, Asher Voss and three great-grand children. The family would like to extend an invitation to celebrate the life of Eldon Friday, September 3, 2021, at his home in Dillon from 1-5. They ask you to please share of a memory of Eldon on the Brundage Funeral home website or bring one to share. Memorial contributions may be made to the Beaverhead Animal Shelter, your local veterinary clinic or a charity of your choice.

Eldon Glen Voss 1938-2021 Eldon Voss passed away peacefully as the sun was rising on the morning of Monday, June 28, 2021. He was surrounded by his family sharing memories and funny stories and certainly kept the Barrett Hospital staff in... View Obituary & Service Information

The family of Eldon Glen Voss created this Life Tributes page to make it easy to share your memories.

Send flowers to the Voss family.