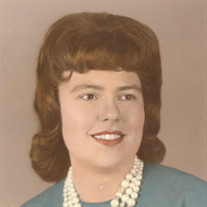 Eileene Cecelia Armstrong died on October 5, 2020 in Albuquerque, NM. She was born in Butte, Montana on September 18, 1935 to Ularie and Francis (Weldon) St. Onge. She was raised on ranches near Whitehall (Pipestone) and Butte (Ninemile Hill). She graduated from Butte High School in 1953 and received a teaching degree from Dillon Normal School in 1955. Eileene taught in the Butte Public School system for approximately 6 years followed by 2 years teaching in Reno Nevada. She returned to Montana and married Edwin Stanley Armstrong on June 29, 1963. They settled in Cardwell, began a family and later moved to Dillon in 1968. Eileene continued educating generations of southwest Montanans in the Butte, Whitehall, Dillon and Melrose school systems until retiring at the age of 65. Over a span of 45 years, including a 12-year period during which she substitute taught in Dillon, she was in the classroom for over 35 years. During this time she returned to school as a student and received her Bachelors of Education degree from Western Montana College. During her teaching years she developed deep friendships with numerous educators, including Marlene Savage, Tia Kober, Jackie Erfle, Marcy Busch, and numerous others. She loved children of all ages, but had a special place for the younger ones and children with difficult backgrounds. She was an Irish Catholic from Butte Montana and a lifelong Chicago Bears fan. Despite her very mild manner, she liked to claim her rougher heritage, and occasionally threatened to use it, when necessary. She is survived by her husband of 57 years Edwin Armstrong; 3 children, 7 grandchildren, and 3 great grandchildren including: daughters Jacqueline (Rod) Christiaens and sons, Valier, Jan Trafelet and son, Albuquerque, N.M.; and son Scott (Sarah) Armstrong and children Albuquerque, NM. Other survivors include nephews and nieces Marc (Nan) Sylvester and daughters, Gilbert, Ariz., Joe (Karen) Sylvester and children, Billings, MT., Michelle (Greg) Hadfield and children, Billings MT; as well as numerous individuals from the Armstrong / Ballard and Wegner sides of the family, whom she claimed as brothers, sisters, nieces and nephews. She was preceded in death by her parents and sisters, Dr. Geraldine St. Onge, NY, NY; Ularie Marie St. Onge, Butte; and Mary Frances Sylvester, Billings. A Rosary Vigil service will be held at St. Rose of Lima in Dillon on October 12th, at 6:30 pm. A Funeral Mass will be held on October 13th, at 12:10 pm, followed by burial at the Mountain View Cemetery in Dillon. In lieu of flowers, the family requests donations be made to St. Rose of Lima in Dillon, the Alzheimer’s Association, or the charity of your choice.

Eileene Cecelia Armstrong died on October 5, 2020 in Albuquerque, NM. She was born in Butte, Montana on September 18, 1935 to Ularie and Francis (Weldon) St. Onge. She was raised on ranches near Whitehall (Pipestone) and Butte (Ninemile Hill).... View Obituary & Service Information

The family of Eileene Cecelia Armstrong created this Life Tributes page to make it easy to share your memories.

Send flowers to the Armstrong family.