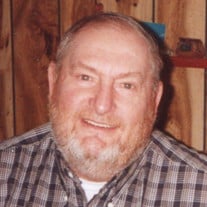 Edward Andrew Kenison of Dillon passed away on January 6, 2016 at Barrett Hospital in Dillon. He was born on April 4, 1940 in Dillon, MT to Edward Frank Kenison and Bertha Marie Salmonsen-Kenison. Ed grew up in Dillon and graduated from Beaverhead County High School in 1958. Ed served in the Montana Army National Guard from 1963 to 1969 as an Artillery Surveyor, Scout for a tank platoon and later a Sergeant. He was an engineering surveyor for the Montana Highway Department and later the US Forest Service. He was an avid fisherman and hunter and enjoyed spending time in the mountains with family. He was a skilled woodworker who built toys for kids, dollhouses, yard ornaments and bluebird houses. He brought back thousands of mountain bluebirds to the Beaverhead County area. He built, installed and managed over 250 bluebird houses for their habitat and all to enjoy. As a behind the scenes community service worker, he was active in the Dillon Garden Club and the yellow ribbon campaign for Dillon Supporting Soldiers. Together with community donations, he cut out, painted and helped hang over 300 yellow ribbons for soldiers and their families. He was later honored by the White Hat Coalition for his community service. Ed was preceded in death by his father Edward, mother Bertha, and his wife Dolores Stenson-Kenison, close cousins Fred “Buster” Brown, and Bill and Larry Jo Salmonsen and his great friend Garvin “Fergi” Ferguson. He is survived by his sister Minnie Kenison-Stevens, nieces Anne (Pat) Wagenfehr, Lisa ( Scott Rakich), nephews Mike (Michelle) Stevens and Robert Stevens. Step children David (Doritta) Stenson and family, Janet Stenson and Ronald Stenson, numerous great nieces and nephews. The family will hold a remembrance memorial service at Brundage Funeral Home on January 11th, at 10:00 AM followed by a graveside service. Memorial contributions may be made to the Dillon Garden Club, Dillon Junior Fiddlers or Barrett Home Health and Hospice. Next time you take your family to the mountains and spot a blue bird, please think of Ed.

Edward Andrew Kenison of Dillon passed away on January 6, 2016 at Barrett Hospital in Dillon. He was born on April 4, 1940 in Dillon, MT to Edward Frank Kenison and Bertha Marie Salmonsen-Kenison. Ed grew up in Dillon and graduated from Beaverhead... View Obituary & Service Information

The family of Edward Andrew Kenison created this Life Tributes page to make it easy to share your memories.

Edward Andrew Kenison of Dillon passed away on January 6, 2016...

Send flowers to the Kenison family.