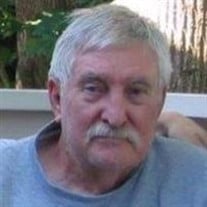 EDWARD RUSSEL BROWN 1927-2016 The Book of Ecclesiastes teaches us that there is nothing sadder or more magnificent than generations changing hands. On the evening of February 14, 2016, another of America&#8217;s &#8216;greatest generation&#8217;... View Obituary & Service Information

The family of Edward Russel Brown created this Life Tributes page to make it easy to share your memories.

The Book of Ecclesiastes teaches...