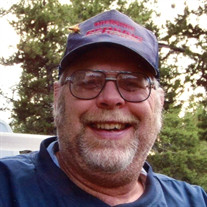 Eddie Leonard Waldemar, age 67, loving husband and father passed away June 25, 2019. Ed was born April 6, 1952 in Dillon, Montana to Leonard and Mary Jo (Wenger) Waldemar. Ed lived the majority of his life in Dillon, Montana. Ed graduated from Beaverhead County High School in 1970. After high school he went to MSU for a year then began working as a surveyor for the Montana Dept. of Transportation for several years. He then moved to Provo, Utah where he attended Utah Tech to become an electrician. While in Utah, Ed filled his spare time with one of his many winter passions - skiing. After graduating, he moved back to Dillon accepting a job as the electrician for Pfizers (Barretts Minerals) working there until his retirement in 2009. He also served on the safety committee for many years. Ed and Lori were married September 30, 1978 and in July of 1979, they welcomed their son Erik. The family enjoyed a great life together, full of outdoor adventures and family gatherings and traveling across the state for Erik's high school and college basketball career. Ed was an active member of the Dillon Jaycees for many years, volunteering for several community projects. He spent a fair amount of time on all of the rivers and lakes in the area with his good friends and his son, Erik. Tuesday night became his "fishing league night" for 40 years. Later going to 'fine arts' in winter. In his younger years, he was in the Boy Scouts and played in Little League later playing City League basketball and softball. Ed was lucky enough to get a “job” after retirement as the camp host at Reservoir Lake - a place he loved dearly. Reservoir Lake was a favorite camping site for the entire family all of his years. It was his "cabin by the lake", with many new and old friends to tell stories with and visit with. He passed away in a place that he loved and his spirit will forever be a part of that area. Eddie was preceded in death by his parents, Leonard and Mary Jo. He is survived by his wife Lori and son Erik; his sisters Brenda (Dave) Borjas, Jerry Jo (Dennis) Rehse; his nieces Rudy (Carl) Sevalstad, Susanne (Nick) Valach; his nephew Harley (Kimberly) Borjas; and grandnephews Cayden, Christopher, Ryland, Dax and Huxley. A Celebration of Life will be held Saturday, July 27th at 2pm at Brundage Funeral Home. Please join us immediately following the celebration for a potluck buffet at the Depot Park across from Beaverhead Brewery. Pulled pork and beef brisket will be provided. Please bring a side dish or dessert to share, dishes for the potluck can be dropped off at Beaverhead Brewery. In lieu of flowers, donations can be made to the Dillon Jaycees.

The family of Eddie Leonard Waldemar created this Life Tributes page to make it easy to share your memories.

Send flowers to the Waldemar family.