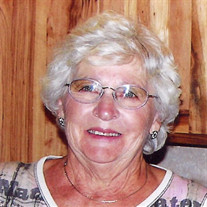 Dorothy Rebich Meine, 86, passed away Thursday morning, October 6th, at Barrett Hospital in Dillon surrounded by her family. She died of a broken heart which the best medical care and loving support and encouragement from her entire family and close friends could not fix. Dorothy Ann Rebich was born September 4, 1930, the sixth of eleven children of Joseph G. and Mary Malesich Rebich. She was born and raised at the original Rebich ranch home near Barretts Station on what is known as Old Stage Road and now owned by her brothers Phil and Joe, Jr. She attended grade school at the old Blacktail School and high school at Beaverhead County High School in Dillon with the class of 1948. Dorothy Ann and Robert E. “Bob” Meine were married May 11, 1947, by Justice of the Peace Louis Stahl at the old Stahl house in Dillon. Dorothy was only 16 years old at the time and living at home. She was supposed to braid her two youngest sisters’ hair for their First Communion the next day; and when her mother, “Ma”, told “Pa” to get Dorothy up so she could braid the hair, he told his wife that Dorothy didn’t come home last night and he was sure she’d gotten married. Her sisters claim to this day that Dorothy got married because she was tired of braiding their hair. Being one of the older siblings of six girls and only two boys, Dorothy did a lot of work on the ranch and was especially helpful to her dad during the haying season. It’s said that her new father-in-law, Henry Meine, was pretty excited to get the new hay hand on his ranch. Bob and Dorothy’s wedding reception held in the granary at the Meine ranch was a talked-about event for many years to come. In fact, there are still people around Dillon who remember that reception with a great deal of enthusiasm. Bob and Dorothy lived and worked on the Meine ranch most of their lives, and Dorothy helped with all aspects of the work, along with raising five children. They spent summers in the Centennial Valley from approximately 1955 until 1960, where they lived in a summer home with an outhouse, wood cooking stove, and only gravity fed cold running water. Her children remember there always seemed to be extra kids around, and none of them remember ever helping with the cooking or dishes. After Bob’s father’s death in 1960, summers were spent in Small Horn, where Dorothy once again cooked for the entire family and extras on a wood stove, only this time with no running water. Even after they began spending summers at their “new” cabin up on the Flynn Meadow in Small Horn, Dorothy was the one who did the spring cleaning, oiling the wood, and hosting. Bob and Dorothy moved into their new log home on Flynn Lane south of Dillon in 1978, where they spent the rest of their lives with a seemingly continuous flow of visiting family and friends. They celebrated their 65th anniversary in 2012 at the home of daughter and son-in-law Bette and Louis Hull, and just this spring celebrated 69 years of marriage. Dorothy took wonderful care of Bob right up until his last breath on July 2nd of this year. Dorothy is survived by her five children, Bobbie Jean (Warren) Mussard, Richard Lee (Linda) Meine, Bette Lou (Louis) Hull, Jerry Robert (Tammy) Meine, and Bonnie Keltz, all of whom currently live in Dillon. Grandchildren are Rebecca Hull (Brian) Goff, Cody (Kirsten) Meine, Joel Drivdahl, Cynthia Hull, Mary Jo Hull, Kristi Meine (Lance) Wasson, Kari Meine (Mike) Orizotti, Robert (Meagan) Blake, Richard (Sadie) Blake, Nicole Hull, and Ashley Meine (Phil) Willett, as well as 19 great-grandchildren. Also surviving Dorothy are three sisters, Irene Rebich Nesgoda, Mary Rebich Norris, and Louise Rebich (Jim) Keef, two brothers, Phil (Shirley) Rebich and Joe, Jr., “Nonie” Rebich, their children and grandchildren. She was preceded in death by her parents, two infant brothers, William and James, a third brother, Paul Anthony Rebich, who died at age 15 from muscular dystrophy, sister Helen Rebich Fargher, sister Betty Rebich Reynolds, granddaughter Brandi Jean Blake, great-grandson Walker Phillip Meine, sons-in-law Jim Blake and Casey Keltz, and most recently by her husband of 69 years, Bob Meine. Services will be held Sunday, October 16th, at 11:00 a.m. at Brundage Funeral Home, with interment of ashes to follow at Mountain View Cemetery. A reception will be held immediately after at the Elks Lodge in Dillon. There will be a visitation Saturday evening at the funeral home from 6:00 to 8:00 p.m. Memorial contributions may be made to Barrett Memorial Home Care & Hospice Services, 1260 S Atlantic St in Dillon or a charity of the donor’s choice.

Dorothy Rebich Meine, 86, passed away Thursday morning, October 6th, at Barrett Hospital in Dillon surrounded by her family. She died of a broken heart which the best medical care and loving support and encouragement from her entire family... View Obituary & Service Information

The family of Dorothy "Dotie" Rebich Meine created this Life Tributes page to make it easy to share your memories.

Send flowers to the Meine family.