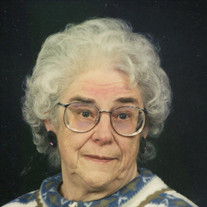 Doris Richard of Dillon, Montana passed at her home in Dillon at the age of 97 on February 9, 2021. Doris was born May 14, 1923 to Thomas and Iva McAdam in Dillon, Montana. Doris attended grade school at the Nelson Country school and graduated with honors from Beaverhead County High School. She graduated from Western Normal School with a teaching degree. She taught school in Roundup and Fishtrap before meeting her husband Dean. They were married November 1943 when Dean was on leave from the Marines just prior to going to Japan. Doris moved to San Diego to be with Dean after he returned from overseas and before his enlistment was up. After Dean's enlistment was up the two moved back to Dillon and set up house. They purchased the family farm, where she had grown up, from Doris's parents and eventually lived until her passing. Doris started working as a secretary for Bruce A. Risley, a tax and accounting practice. From being a secretary, she studied and earned a CPA license. In 1970, and eventually owned her own CPA firm where everyone became family. Doris raised four children along the way and got involved in their lives. She was 4-H leader, Rainbow Girls sponsor. She along with her husband attended as many ball games both in town and out of town as possible. Doris loved the outdoors was also active in Soroptimist International, Mizpah Chapter order of Eastern star, Dillon Garden Club, and Grace United Methodist Church. During her tenure as a 4-H 'leader she got involved in the floriculture department during the Beaverhead County Fair. She headed up the floriculture department at the fair until just last year. She went on to become recognized flower judge for different fairs and flower shows in Montana. Doris became an active Alumni member of Western Montana College and helped them secure funding to build the Albert Bender leaning center in the Pioneer Mountains at Birch Creek. She was an avid swimmer and was determined to get a swimming pool for the community. Finally with the help from a lot of people and some determination it was accomplished, when the YMCA was built with swimming pool, lap pool, and exercise facility. In 1975 Dean was tragically killed in an automobile accident. Doris continued to work and lead an active life. In the1980's Doris and Bob Dumke became good friends and traveled the state for Eastern Star. She did everything she could to attend her grandchildren's special events, and even some of the events of the great grandchildren. She was a family woman and family came first and foremost in her life. Doris had a long and fulfilling life and was a well respected member of the Dillon community she loved. Doris was preceded in death by her parents Thomas and Iva McAdam, husband Dean, son Dwight. She is survived by son Donald Richard, daughter Darlene Hansen and her husband Eric, daughter Deanna Richard and John Schindler, and very special friends Cathy Speich-Ferguson and Arlis Vannett, grandchildren Rodney Hansen, Jon Hansen, Laura DeVore, Beth Stiger, David Richard, Karissa Nissen and several great grandchildren, great great grandchildren and neices and nephews. Funeral services will be held at 2 PM, Monday, August 2,2021 at the Brundage Funeral Home at 300 S. Atlantic. A reception will follow at the 4-H building. A special celebration and remembrance will be at Bannack State Park's Methodist Church, August 3, 2021 at 4 PM. A no host picnic will take place in the pavilion following. Beverages and desert will be provided. Deanna, Darlene and Don would like to express a special thank you to Dr. Burke Hansen and Susie for the special care they gave our Mom. MEMORIALS: Southwestern YMCA 75 Swenson Way Dillon, Montana 59725 Order of Easter Star P.O. Box 98 Virginia City, Montana 59755 Grace United Methodist Church P.O. Box 1313 Dillon, Montana Dillon Garden Club 1150 Hilltop Dr. Dillon, Montana 59725

Doris Richard of Dillon, Montana passed at her home in Dillon at the age of 97 on February 9, 2021. Doris was born May 14, 1923 to Thomas and Iva McAdam in Dillon, Montana. Doris attended grade school at the Nelson Country school and graduated... View Obituary & Service Information

The family of Doris Richard created this Life Tributes page to make it easy to share your memories.

Doris Richard of Dillon, Montana passed at her home in Dillon...

Send flowers to the Richard family.