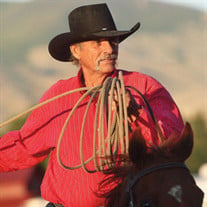 Buzz Kirkpatrick Promoted to Glory June 18, 2020 His given name was Donald Vernon Kirkpatrick, but his sister Karen could not say Donald, she called him Buzzer instead of brother. So, the nick name Buzz stuck from the time he was born. He was born to Wilbur and Charlotte Kirkpatrick on September 26th, 1945. Raised in Fallon and Terry Montana where he graduated from Terry High School. Soon after graduation he was drafted in the army and served his country in a tour in Vietnam. He forged relationships in the service that can only come from having one another’s back, a bond made for life. Buzz served as a machine-gunner, and combat veteran. Anyone who knew Buzz, knows he was an outspoken Republican and loved God and country. He was a member of the VFW and American Legion and served as Quartermaster. His favorite place on earth was the York Ranch outside of Wisdom where he lived many happy years. Another favorite was Robb Creek and he spent many summers at the cow camp above Alder riding for the Robb-Ledford Association. He was a brand inspector for Beaverhead County for many years, which he loved. Another place that was dear to his heart was Eastern Montana and his friends and family there. Fallon and Terry were a place he always considered home. He is survived by his wife Paula Kirkpatrick, Buzz had two sons, Dennis (wife Mykal) and Jess, two daughters Kristy McKay (husband Russ), and Ericka Kirkpatrick. Grandchildren Sidney, Troy, Valyn, Madelyn, Jace, Logan, Kaden, and Kenna. Two sisters Karen Algren, Evie Larson (husband Luke). Brother Lee (wife Lou), and numerous nieces and nephews. He is also survived by his step daughters Sarah (Dan) Reinhold, Meagan (Robert) Blake, Holly (Spencer) Sorensen. Grandchildren Logan, Macy, Zoe, Brooke, Paige, Claire, Sam, Quinn, and Carter. Buzz was a gentleman and always kind through an extremely difficult illness. He was an avid reader and a true cowboy at heart. It is important to thank the CNA’s, Nurses and staff at Pioneer Care in Dillon. They helped make his walk home a comfort for us both. Special thanks also to friends Sandi Lapham, Cindy & George Davidson and Mari Edgekoski for their care and visits to Buzz. Donations can be made to the VFW or American Legion. Private graveside service, with escort by Patriot Guard from Dillon to Wisdom and Military Honors will be held.

Buzz Kirkpatrick Promoted to Glory June 18, 2020 His given name was Donald Vernon Kirkpatrick, but his sister Karen could not say Donald, she called him Buzzer instead of brother. So, the nick name Buzz stuck from the time... View Obituary & Service Information

The family of Donald "Buzz" Kirkpatrick created this Life Tributes page to make it easy to share your memories.

Send flowers to the Kirkpatrick family.