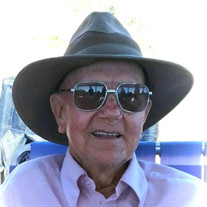 Don P. Cheney, (92), resident of Lima, MT passed away peacefully at home on November 10, 2018. Don was born September 25, 1926 to Austin & Carrie (Pincock) Cheney. He was the fourth of seven children. During the Depression, he was raised on a dairy farm followed by years of farming & ranching in Southern Idaho & Southwest Montana. He was a humble man that was respected for his community-minded spirit, judgement, strong work ethic, and happy temperament. Quick to lend a hand, and a smile, he could generally be located throughout his long life by following the sound of whistling or singing. After graduating from Aberdeen, ID High School in 1944, Don volunteered for Army Paratrooper Duty during WWII. His foreign war experience was spent in the Philippines and Japan. Following his honorable discharge, Don moved to Dell, MT in 1950. He joined the Army Reserves & was called back to active duty during the Korean Conflict. In 1951, he met the love of his life, Anna May (Kluesner) Cheney. They were married April 2, 1952 and worked their small ranch outside of Dell. This year marked their 66th wedding anniversary, and together they raised 4 children and a niece. Allegiance to his family & country was always the cornerstones of his being. They never missed an opportunity to support their children’s endeavors & took great pride in celebrating life’s successes. After selling the ranch in 1959, Don worked as foreman for several area ranches until late 1966. The family then moved to Lima where he worked for Beaverhead County road department until retiring in 1990. In the community, Don served as VFW Post Commander, Lima Fire Chief, was in Lima’s inaugural EMT class later serving as EMT instructor, Ambulance volunteer, School Board, the Lima Swimming Pool Board, Rifle Club instructor among many other community activities - including time spent as a Thespian, performing in multiple fund-raising plays! He was an avid outdoorsman. He loved to fish, hunt and, following his retirement, spent countless hours biking. When cold temperatures necessitated insulated coveralls for the bike ride, he declared time to “Go South” where 25 enjoyable years were spent nurturing friendships in Overton, NV. He leaves behind numerous true & loyal friends that he’s made throughout the course of his life. Don was preceded in death by his parents, siblings, Gwen Grover & Bryce Cheney. He is survived by his loving family: wife, Anna May, children, Mel Cheney (Colleen), Mike Cheney (Rose Marie), Christy Heffernan (Terry), Connie Frank (Bob), niece, Dena Carlin (Twig), siblings, Alice Saunders, Carol McKinley, Larry Cheney, & Wayne Cheney, grandchildren, Marc, Jacob, Drew, Melissa, Kelsey, & Carly, great grandchildren, Peyton, Emma, Scarlett, Felix, & Hugo. The family requests donations be made to the Lima Swimming Pool & the Lima Volunteer Fire Department or charity of your choice.

Don P. Cheney, (92), resident of Lima, MT passed away peacefully at home on November 10, 2018. Don was born September 25, 1926 to Austin & Carrie (Pincock) Cheney. He was the fourth of seven children. During the Depression, he was raised on... View Obituary & Service Information

The family of Don P Cheney created this Life Tributes page to make it easy to share your memories.

Send flowers to the Cheney family.