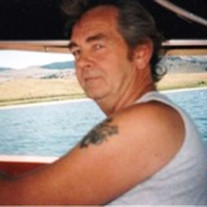 Dee Duane Smith died on October 5, 2014 surrounded by his family at his home in Argenta, Montana.  He was the son of Margaret Bernice Cummings and  Jack L. Smith; he was born in Columbus Montana on March 13, 1944. Dee was the youngest of 13 children and his family moved to Argenta when he was five years old. Dee joined the Army in 1962 and served his country until 1975. Dee met the love of his life in August of 1969. They decided they were soul mates and they wanted to spend the rest of their lives with one another. Jean Marie West and Dee Duane Smith were married on November 20, 1969. In 1970-1971 Dee fought in the Vietnam War. It was during this time that Jean found out that she was pregnant. Jean gave birth to twins on February 22, 1971. Although Dee was not, there for the birth of his twins he was extremely happy when he received the news of the birth of his sons Billy Ray Smith and Steven Ray Smith. Dee was finally reunited with his family when the twins were six months old. On September 27, 1973, Jean gave birth to the baby of the family Rodney Smith. November 18, 1986 was one of the happiest days of Deeâ€™s life. This is when he adopted his son Clifford Smith.   Dee enjoyed spending time with family. He was a very family oriented man and loved spending time with them. He enjoyed teaching all five of his boys how to hunt and navigate themselves around the mountain. Dee knew the Beaverhead National Forest better than most. After all, it was his back yard when he was growing up. Dee loved being in the great outdoors. He was an avid angler, hunter, and loved going camping with his family. Dee had a special quality about him that was unique. He cared about everyone that entered into his life. Dee loved all of his boys, wife, and his grandchildren. He even showed unique ways of showing his daughter-in-laws that he cared. Dee had a green thumb and could keep any plant alive. He loved his plants and decorating his yard with flowers, ponds and other yard decorations. Dee is survived by his wife Jean Smith, Sons Jim West, Cliff Smith (Anita), Bill Smith (Jennifer), Steve Smith (Angie), and Rod Smith (Samantha), 16 grandchildren, and 5 great grandchildren. He is also survived by four brothers and four sisters numerous cousins, nieces, and nephews. Dee was proceeded in death by his mother Margaret Bernice Cummings and father Jack L. Smith and four siblings. The family would like to give special Thanks to Barrett Hospital, Hospice, Dr. McIntire, Dr. Weed, and Doctor Moore for all the great care they give to Dee in his time of need. A celebration of life will take place at the Vineyard 310 East Center Street in Dillon Montana on Saturday October 11, 2014 at 2 PM. There will be a potluck and everyone is asked to bring a side dish or dessert.   $(document).ready(function(){ });

Dee Duane Smith died on October 5, 2014 surrounded by his family at his home in Argenta, Montana.  He was the son of Margaret Bernice Cummings and  Jack L. Smith; he was born in Columbus Montana on March 13, 1944. Dee was the youngest of 13... View Obituary & Service Information

The family of Dee Duane Smith created this Life Tributes page to make it easy to share your memories.

Dee Duane Smith died on October 5, 2014 surrounded by his family...

Send flowers to the Smith family.