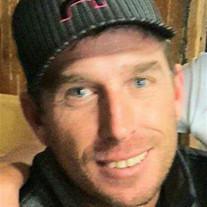 Daniel Ralph Podunovich “Danny” was born August 26, 1977 in Minneapolis, Minnesota. He moved to Dillon, Montana at a young age where he grew up playing baseball, fishing, hunting and just enjoying Montana. In 2003 Danny married Tara Straubhaar and became father to her two daughters Kenzie and Tatem and loved them as his own, within the next two years his own beloved daughters Taylor and Maddy were born. All he ever wanted was to be a father to his girls and he was a great one and he lived for them. Danny divorced and moved to California, working as a lineman hanging from helicopters like it was second nature, during that time he met and became engaged to Kathie Nichols. She has a daughter Payton who Danny welcomed into his family of girls. In the last 6 years, he was also blessed with three grandchildren, granddaughter, Kaizley and grandsons; Kayden and Kayson. Even though he didn’t get to know them as well as he would have liked to he loved them very much. Danny enjoyed sports, hunting, fishing, and coming home to Montana whenever he got the chance. Danny worked at Par Electric at the time of his passing. Danny is preceded in death by his gramma Jean, grandpa Dave, uncle Steve and father, Ralph. He is survived by his mother, Debby his girls; Kenzie, Tatem, Taylor, Maddy, and Payton, and fiancé, Kathie, grandchildren, Kaizley, Kayden, and Kayson. He is also survived by uncles; Randy (Joyce) Spencer, Jimmy (Penny) Spencer, aunts; Judy (Tom), Grant, Susie Burgess and numerous cousins. A celebration of life is scheduled for Saturday, July 6th at 2 PM at Brundage Funeral Home with a visitation scheduled between noon and 2PM.

The family of Daniel R Podunovich created this Life Tributes page to make it easy to share your memories.

Send flowers to the Podunovich family.