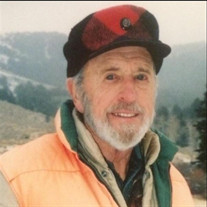 Daniel Garth Hodgson Block was born in Wisconsin Rapids on November 21, 1919 and lived on a farm at Rudolf until he was four when the family moved to Milwaukee. He graduated from Solomon Juneau High School in 1937 and attended Milwaukee State Teachers College for four years. When WW II began he enlisted in the Eighth Air Force on January 7, 1942. Upon discharge in the fall of 1945 he married Gerane Johnson , moved to Montana and enrolled at the University of Montana. He earned two degrees in Wildlife Technology, and then returned in 1970 to earn his doctorate. He first taught high school for six years on the Flathead Indian Reservation and then was a professor of biological science from 1961 until 1985 at the University of Montana-Western when he retired. At the July 1994 Board of Regents meeting the regents authorized the University of Montana-Western to name the Office Classroom building the “Daniel G. Block Hall.” “He was brilliant, diligent, and absolutely consistent, and his students received his very best every day,” said the official proclamation. “Only occasionally does one find a professor at the university level who is willing to counsel students and provide leadership beyond the conveyance of basic subject matter to the degree that Dan Block did.” He was a pioneer in outdoor classroom teaching and was an integral part of the growth of programs at the Birch Creek Outdoor Education Center. During the 1970s he secured a grant to establish an Emergency Medical Technician program at Western. He also started the first Drug Education class at the college and was instrumental in establishing a four-year Natural Heritage degree program. In addition to other accomplishments he was the first emeritus chosen by the Western Faculty Association to deliver the Commencement Address in 1987 and was named “Emeritus Professor of the Year” for his work as senior editor of the Western Montana College Centennial History Book in 1994. He is survived by his wife Gerane, sons Garth (Paula) and Bryan (Terri); grandsons Zachary (Melissa), Machi, and Daniel (Tara) ; great-grandson Caden; and sister Ione Powell.

Daniel Garth Hodgson Block was born in Wisconsin Rapids on November 21, 1919 and lived on a farm at Rudolf until he was four when the family moved to Milwaukee. He graduated from Solomon Juneau High School in 1937 and attended Milwaukee State... View Obituary & Service Information

The family of Daniel Garth Block created this Life Tributes page to make it easy to share your memories.

Send flowers to the Block family.