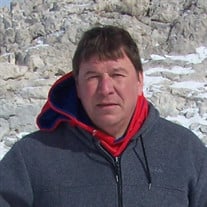 Craig Martin Rehm April 17, 1955 – December 15, 2019 Craig passed away at home among friends and family in the early morning hours of December 15, 2019. He was born to Gilbert and Josephine (Rykowski) Rehm in Colfax, WA. Craig spent his childhood growing up on various ranches which his parents managed in Washington, Nevada, Idaho, and Montana, but always maintained Dillon as his home. Craig graduated from Sand Point high school and attended Montana State University, graduating with a degree in Ag Education in 1977. After a stint as AG News Director at KMON in Great Falls, he began his banking career at First National Bank in Miles City, MT in 1980. There he met the love of his life Darla Espinosa. Craig and Darla were married on August 14, 1982 and started their family with the birth of Travis in 1990 and Trevor in 1992. He continued his education at Colorado State University receiving a Master’s in Business Marking in 1991. His career in banking took him throughout Montana spending time in Miles City, Great Falls, Fort Benton, and Dillon. In 2002, Craig and his family came back to Dillon where he established Beaverhead Bank, which later merged with Stockman Bank. He finished his working years as a Financial Advisor for D.A. Davidson, retiring in 2017. Craig enjoyed all things outdoors but held particular interest in fishing, hunting, hiking, and shooting. Craig had a large network of friends and loved to organize gatherings for all occasions and always made sure a great time was had by all. Craig will be remembered for his generous spirt, honesty, and sense of humor. Craig was proceeded in death by his parents Gib and Jo, and numerous aunts and uncles. He is survived by his wife Darla, his sons Travis and Trevor, their Fiancé Kelsey Stoner and girlfriend Andrea Walt, respectively, his sister Kimberly, Backwoods Bunch, and numerous aunts and cousins. Memorial services will be announced at a future date (summer 2020). In lieu of flowers, donations to Dillon Rotary Club or your favorite charity would be appreciated.

Craig Martin Rehm April 17, 1955 &#8211; December 15, 2019 Craig passed away at home among friends and family in the early morning hours of December 15, 2019. He was born to Gilbert and Josephine (Rykowski) Rehm in Colfax, WA. Craig spent... View Obituary & Service Information

The family of Craig Martin Rehm created this Life Tributes page to make it easy to share your memories.

Send flowers to the Rehm family.