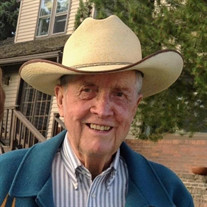 Clayton L. Huntley, our iconic father, born in Dillon, Montana on February 4, 1930 went home to be with Jesus on February 25, 2022. At the age of 92 he remained passionate about living life and will always be remembered as the cowboy who NEVER quit ranching, who had a deep passion for well irrigated fields, well cared for cattle, fences that were always mended, perfectly mowed hay fields, and making sure you were always mounted on a sound horse with good conformation who had some cow sense. Clayton had a unique personality that captured a plethora of dear friends who joined him in adventures throughout his well lived life. You might find them out elk hunting, huddled around the camp fire, raising a few tall ones trying to outwit each other playing a wild game of poker or teeing one up on the golf course betting on each hole played. You could always find Clayton hidden behind a newspaper, checking out the stock market, watching the 10:00 news or the football game he had bet his buddy on. He was a man of perseverance, meeting physical challenges with grit and determination, who embraced conservative value and always encouraged fairness. Clayton attended high school in Dillon and became an avid Griz fan while attending the University of Montana. Memories capture Dad driving miles to watch his sons, granddaughters & grandsons play basketball and other sports, loaning a friend or family member money to give them a leg up in life, chewing tobacco, giving his nephew or grandson his tattered cowboy hat, enjoying an off-colored joke, heading out the door with a well-worn cowboy hat atop his head to check the irrigation, fences, and cattle in his side by side. Dad always carried a hanky in his pocket and a wallet filled with big dollar bills ready to cover the meal you ate together. He always made sure his windshield was clean and his tank was full of gas when heading to town for many of his civic duties which included serving on the Beaverhead County High School Board of trustees, Miner’s Bank Board of Directors, President of the Montana Golf Association to name a few. Dad had an uncanny eye for shooting trap in his younger days and passed his legacy of gun prowess onto many of his children and grandchildren. Clayton married his beloved bride of 72 years, Barbara D. Simmons, on September 10, 1950. Together they have five children: Sheryl Huntley, Patricia Monaco (Tony), Blake Huntley (Brenda), Susan Sanders (Brian) and Robert Huntley (Maria). His children blessed him with 13 grandchildren, 2 step grandchildren, and 17 great grandchildren. As he journeyed to the other side, he will gloriously join his parents, Ralph Huntley and Ebba Anderson Huntley, sister Gail, grandson Robert James Monaco and numerous friends who crossed the finish line before him. We are confident they are rejoicing at Dad’s arrival as he will bring his dynamic character to life in perfection once again free of pain and suffering for which we are grateful. Glory be to God. We will miss all his roles as a loving husband, dedicated father, giving grandpa, supportive uncle, caring cousin, faithful friend and community servant. The family will be having a celebration of life for Clayton L. Huntley on Father’s Day weekend June 2022 in Wisdom, Montana. Details will follow. Memorials can be sent to: Robert J. Monaco Memorial Scholarship Foundation UMW Foundation 750 S. Atlantic St. Dillon, Montana 59725 Alzheimer’s Association or the American Diabetes Association

Clayton L. Huntley, our iconic father, born in Dillon, Montana on February 4, 1930 went home to be with Jesus on February 25, 2022. At the age of 92 he remained passionate about living life and will always be remembered as the cowboy who NEVER... View Obituary & Service Information

The family of Clayton L. Huntley created this Life Tributes page to make it easy to share your memories.

Send flowers to the Huntley family.