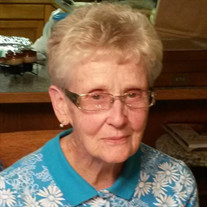 Claire Blackburn Pilon passed away peacefully April 4, 2022. She was born October 3, 1932 in Library Pennsylvania. She moved to Dillon Montana when she was six years old with her widowed mother, her father John passed when she was 3 years old. Her mother was called to First Baptist church as a missionary. Claire grew up in Dillon attending schools and graduated from BCHS in 1950. She married her high school sweetheart, Roscoe, in 1952, they were married for 68 years, before his passing. Claire was partner in everything Roscoe did from running Dillon Disposal to farming and ranching. In their later years they enjoyed traveling to Yuma AZ, enjoying the fun and sun, while developing new friendships with people from around North America. As a couple, they were strong supporters of all their children and grandchildren’s activities. She also worked outside of the home at different times in Dillon, a couple of those jobs were a telephone operator and customer service with Montgomery Wards. Claire accepted Christ as her savior at a young age and was a lifelong member of First Baptist Church in Dillon, where she wore many hats. One of those was pianist, playing for services and special music. She played piano in the church beginning in her high school years and played until her eyes failed. Her family consisted of her immediate family, however; her church family was also very important to her. Her home was a place of hospitality. Many missionaries and Christian workers stayed at their house while in the area. Claire was a wonderful wife, mother and grandmother. Each grandchild thought they were her favorite, which the were. Claire was preceded in death by her mother Edna Cantrell (Blackburn), husband Roscoe. Survived by her children and their families, Becky (Tom) Miller, their children Melissa (Justin) Schluessler, Michael (Sarah) Miller, Kavin (Amber) Miller, Talyn (Toni) Miller. Dan (Teresa) Pilon, children Tadd Pilon, Brian (Shanna) Pilon, Rory (Shantel) Pilon, and Jim Pilon, children Brent Pilon, Travis (Kacey) Pilon and Kaden Pilon. Sister-in-law Lora Lee (Steve) Dougherty, and 20 great-grandchildren, numerous nieces and nephews. Services are planned for Monday April 11, 2022, At Brundage Funeral Home. Viewing will take place at 11:00 AM and the service will be at 1:00 PM. Reception to follow at First Baptist Church. Memorials in Claire’s name may be made to First Baptist Church, Hospice of Dillon, or the charity of choice.

Claire Blackburn Pilon passed away peacefully April 4, 2022. She was born October 3, 1932 in Library Pennsylvania. She moved to Dillon Montana when she was six years old with her widowed mother, her father John passed when she was 3 years old.... View Obituary & Service Information

The family of Claire Ellen Pilon created this Life Tributes page to make it easy to share your memories.

Send flowers to the Pilon family.