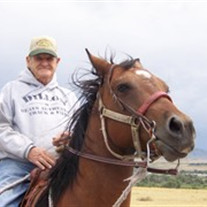 Chester William Huxtable passed away at his home in Dillon on December 20th, 2014 at the age of 92. Chet was born on May 31st, 1922 in Douglas, Wyoming to Nyjma and Lloyd Huxtable. He was very active in the American Legion, Shriners and he was a Masonâ€™s Past Master.   He was very proud to serve in the South Pacific (1942-44) in the 836th Aviation Engineerâ€™s Battalion, where he operated heavy machinery- which later became his trade. After WWII, he returned to his family ranch in Glenrock, Wy.   He later moved to Dillon, MT where he became the owner/operator of Huxtable Construction- a business he owned for years.  He could dig the straightest ditches in the county!   Chet was a friendly fellow who loved to visit.  He loved to tell stories of growing up in Wyoming and his experiences during his war time deployment.  We all loved to listen to his stories and look at his pictures and memorabilia.  Chet was also an avid reader of westerns and historic novels and after his retirement, he found time to read 100â€™s of books. He loved his pets- his three dogs and his tom cat.  He also loved to feed the wild birds and chipmunks he could watch from his kitchen window.   He was also an avid hunter and enjoyed many wonderful hunts, including a trip to Alaska with his son, Warren, a buffalo hunt with his son, Bill, and many others.  He even went on a horseback moose hunt when he was 85 years old! He was preceded in death by his mother, father, brother (Charles) and son (Larry).  He was survived by his wife of 45 years (Billie) and their son (William); his children from his first marriage: Warren, Joan, and Rita; stepchildren: Ed, Diana, Lois, Cathy and Denise; his brother (Howard) and his sister (Myrtle). He had 22 grandchildren and 20 great-grand children and numerous nieces and nephews. Viewing Friday from 5-8p.m., Masonic services are Saturday, December 27 at 11:00a.m., both at Brundage Funeral Home.  Full military Graveside Service to follow at Mountain View Cemetery. Reception will be at the LDS Church for friends and family. $(document).ready(function(){ });

Chester William Huxtable passed away at his home in Dillon on December 20th, 2014 at the age of 92. Chet was born on May 31st, 1922 in Douglas, Wyoming to Nyjma and Lloyd Huxtable. He was very active in the American Legion, Shriners and he... View Obituary & Service Information

The family of Chester William Huxtable created this Life Tributes page to make it easy to share your memories.

Chester William Huxtable passed away at his home in Dillon on...

Send flowers to the Huxtable family.