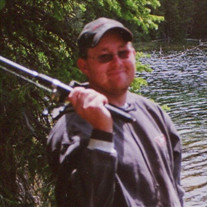 Charles “Charlie” Calvin Zimdars passed away July 25th, 2018. He was born August 5th, 1981 in Billings, Montana to Calvin Charles Zimdars and Lorie Waller Zimdars. In 1989, Charlie’s family moved from Circle, Montana to Polaris, Montana where many childhood adventures were created on the ranch. Charlie attended Polaris Rural School until 8th grade. He was a 2000 graduate of Beaverhead County High School. After graduation, the passion to farm was strong and he began working for his grandparents, Helen and Gordy Waller and Uncle Harold Waller in Circle, Montana. In 2003, Charlie began taking courses at Montana Tech in Butte. Charlie made honor roll several semesters while attending Montana Tech. However, the need to be outside won over sitting in a classroom any day of the week. The passion to farm and ranch was calling him home and he decided to return to the family ranch in Polaris, Montana in 2005. Charlie took on many responsibilities at the farm and ranch. Many friends and neighbors took notice of his hard work ethic and enthusiasm to get a job done right while on the ranch. In the spring of 2006, Charlie met his future wife, Dawn (Spath) Zimdars, at the Grasshopper Inn after she complimented him on his patched jeans that his Grandma Helen had mended for him. Charlie and Dawn married on October 11th, 2008 in Dillon, Montana. In April 2010, Charlie and Dawn welcomed their first child, Lyle, into their hearts and lives. They completed their family with the surprising arrival of their twins, Anne and Koy in October 2015. Charlie loved his children passionately and patiently--always providing for them. Charlie was an outdoor enthusiast. Some of his favorite hobbies were fishing, snowmobiling, tinkering with and driving his old 1965 Chevy C10 pickup from his Dad, and froggin’ with his brother and sister at Crystal Park. When the opportunity arose, exploring new country on dirt bikes with his brother, Jay and son, Lyle was a favorite way to spend a day off. Charlie was kind, caring, had a quick wit, and a knack for telling a good story. Charlie was a jack of all trades. He would tinker and craft many projects for his family and friends. One year for Christmas, everyone received a “Charlie-made” horseshoe coat hanger that was a moose. Charlie worked for several different places in Dillon over the years. He enjoyed his time working at East Bench Irrigation District until 2012. He worked for the Bureau of Reclamation and took great pride in the maintenance and landscaping at Clark Canyon Reservoir until 2017. Most recently he began a new position as the Maintenance Manager at the Beaverhead Villa Apartments. He enjoyed the people at the Villa and the treasures they left behind. At the end of the day, he’d often arrive home from work with a story about how he helped a stranger in need, never asking for anything in return. Charlie loved spending time with family and friends. He especially loved the time he spent with his Dad, Calvin. They enjoyed fishing at Agnes Lake, hiking to Sawtooth Lake, storytelling, and trying to beat each other at card games. Charlie’s hope for his beloved father, was that he ran off with a beautiful woman to Hawaii. May they be reunited again when the time arrives. Charlie is survived by his wife, Dawn (Spath) Zimdars, their three beautiful children, Lyle, Anne, and Koy Zimdars; his mother Lorie Waller Zimdars of Dillon, Montana; his sister Clarissa and her family, Tye and Cydney Brown of Basin, Wyoming; his brother, Jay “Spivey” Zimdars of Dillon, Montana; his maternal grandparents, Gordon and Helen Waller of Circle, Montana; two amazing nephews, Grayson Spath of Cloverdale, Oregon and Pierce Edgar of Dillon, Montana and numerous aunts, uncles, cousins and endearing friends. He is preceded in death by his cousin Elliot Waller, his paternal grandparents Julius and Ardus Zimdars and his Aunt, Mary Redlich. A memorial service and celebration of Charlie’s life will be held at Brundage Funeral Home on August 2nd at 2:30pm. A pot-luck reception will follow at the Vineyard Church. In lieu of flowers, please consider making a donation to your local mental health crisis center or the American Foundation for Suicide Prevention.

The family of Charles Zimdars created this Life Tributes page to make it easy to share your memories.

Send flowers to the Zimdars family.