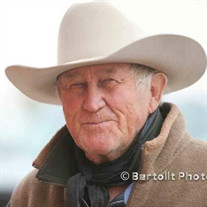 TO WATCH THE LIVESTREAM OF SERVICES PLEASE USE THE LINK http://Youtu.be/asypV8W9-GI Charles Hahnkamp, our beloved Father, Grandfather and Great Grandfather made his final ride and entered the gates of heaven with a grand entry on Thursday, January 13, 2022. He lived life larger than anyone we know. It doesn’t seem like there was a soul who didn’t know Charlie Hahnkamp and have a story or two to tell of him. He would do anything for anybody! All he ever wanted to be was a cowboy, and a cowboy he was, but so much more. Charles was born on February 2nd, 1931 to Charles Preston Hahnkamp and Elva Minerva Coston (Jackie) in Chinook, Montana in a sheep camp. His family moved to Ashland when he was 3 and was only 5 when he saddled up and started riding his horse to school. By the age of 11, he was living and working for Tom and Girly Gilmore on Tongue River. In 1957, he married Joyce Corning and continued to ranch until they moved to Joyce’s family’s ranch in Melrose with their infant son Lee in 1959. In 1963, another son, Jay Hahnkamp joined the family on the ranch on the Big Hole River. While running an Angus cattle operation, he became the President of the Vipond Grazing Association, and was honored as a Montana Stockgrowers Stockman of the Year, while beginning his tireless effort towards his war on weeds. He was instrumental in leading the Headwaters Resource Conservation Range Weed Committee and lobbied for stronger weed legislation in Montana and in Washington D.C., while controlling weeds on his own property and that of his neighbors. He also served as Chair of the SW Montana Coordinated Weed Control Project and the East Pioneer Experimental Stewardship Program and was awarded the Jefferson Award for his outstanding public service in his war against knapweed. He became affectionately known as Charlie Knapkamp. In addition to ranching, he spent almost 30 years working for stock contractors, as a pick up man, rescuing cowboys from the back of bucking horses, hauling bulls and furnishing roping and bulldogging stock. He also donated hours of time and cattle and his pick up expertise to high school and college rodeo programs. He became an honorary member of WMC Rodeo Club in 1994 and was inducted as a Rodeo Legend in the Montana Pro Rodeo Hall and Wall of Fame in 2013 and the Montana Cowboy Hall of Fame in 2014. Charlie was quoted as saying “they say your destiny chooses you at times…so when you’re 10 years old and trailing cows from Broadus to Bel Fourche, it’s safe to say you’re going to be a cowboy”. And he was, the real deal! He loved spending time with family and friends where there was no shortage of stories and laughter and he was sure to send you on your way with a joke or a trick played on you. He drove miles and miles taking his sons and anyone else that needed a ride to 4-H events and rodeos, and he never missed a birthday party, school event, sporting event or rodeo as he followed his 6 grandkids. It started all over again with his great grandkids and you would see him sitting on his walker at the soccer field, baseball field, flag football field, or dance recital. We can thank Deanna and CrossFit for allowing him to continue to be active and to do what he loved these past few years. In true cowboy fashion, he exhibited his iron will and his mischievous sense of humor to the very end! This world was a better place with this one-of-a-kind cowboy in it, but he is riding high and whooping it up now! Charles was preceded in death by his parents Charles and Jackie, his sisters Lorraine Clawiter and Karen Hahnkamp, his beloved wife of 61 years, Joyce Corning Hahnkamp, and great grandbaby, Rooster Schuetz. He leaves his legacy behind in the lives of his sons Lee (Dalene) Hahnkamp, Jay (Denise) Hahnkamp, and Grandchildren: Mandy Hahnkamp, Darcy (Matt) Schuetz, Samantha (JR) Davis, Charlee (Matt) Reed, Dillon Hahnkamp and Cord Hahnkamp, and 9 Great Grandchildren: Kolton and Carsyn Davis, Jacob, Anna Jo, Abraham, and Sampson Schuetz, Deliah, Rylee, and Kinlee Reed. He also leaves numerous nieces and nephews and his special friend Beverly Figgins. Our family is grateful for her devotion and care for him. Please join us in celebrating his life on Saturday, January 22, 2022 at 1:00 pm in the Frontier Event Center, Dillon, MT. Memorials can be made to the Hahnkamp Family Rodeo Scholarship Fund at Pioneer Federal Savings & Loan in Dillon or to your favorite charity.

TO WATCH THE LIVESTREAM OF SERVICES PLEASE USE THE LINK http://Youtu.be/asypV8W9-GI Charles Hahnkamp, our beloved Father, Grandfather and Great Grandfather made his final ride and entered the gates of heaven with a grand entry on Thursday,... View Obituary & Service Information

The family of Charles Preston Hahnkamp created this Life Tributes page to make it easy to share your memories.

TO WATCH THE LIVESTREAM OF SERVICES PLEASE USE THE LINK http://Youtu.be/asypV8W9-GI

Send flowers to the Hahnkamp family.