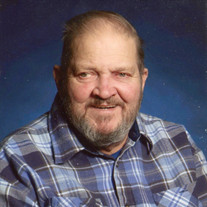 Charles Edward "Chuck" Dishno was born August 4, 1934, in Bly, Oregon. Chuck was very proud of the fact that he was 4th in his high school graduation class...of four; he like to say he was the top of the lower 25%. Although Chuck came to Dillon from Oregon, via California, he came with genuine Montana bon a fides. His Mother, Lura Hartman Dishno, was born in Missoula and his Grandfather, Silas Dishno, came to the Big Hole in 1895. He bought a house and barn and a couple of hundred acres near what is now Jackson. Silas was a founding father of Dillon. If you stroll along railroad Street, heading toward the fairgrounds, you can see his name stamped into the sidewalk in front of the pretty white house he built for his wife, Melinda. Chuck's father, Ed Dishno, had a ranch in the Big Hole in the 20's. Chuck and his wife, Roz, moved to Dillon in 1989, where he started a printing business, Bannack Press, in the back room of the Sears building. As we all know, the Sears building is gone now...which is just as well, as Chuck used to say, if you turned out the lights in the daytime, you could see sun light streaming through the broken mortar in the walls, and it was a little bit drafty in the winter. One of the things Chuck loved best in his life, next to his wife, Roz, was Kiwanis. Chuck was a Kiwanian for 40 years, and rose to the rank of Governor of the Montana District, 1995-96, the first ever from Dillon, and ran for International Trustee, in 1997. Chuck loved living in Dillon, and up until a few short years ago, could be seen tooling through the streets on his silver scooter, passing out dog biscuits to his furry friends, and terrorizing shoppers at the IGA. Chuck loved to tell short, very often, hilarious stories about his childhood in Oregon, his stint in the army and his wonderful family. He published a book of short stories entitled, "The Way We Were" in 2006. It's out of print now, but several copies are being offered on Amazon for the minuscule price of just $1,076.30 + $3.99 shipping. And speaking of his writings, those of you who regularly read the Dillionite, are familiar with Chuck's Famous Quotes and legendary political "feud" with La Von Brillhart. They were such good enemies, that they called each other on their birthdays every year. Chuck will be mightily missed by his wife of 47 years, Rosalind Chong Dishno; his daughter, Lura Panici, and her family of Yearington, NV; his son Mike Dishno, wife Lisa Dishno, and their family of Clovis, CA; his step-son, David Wilson, his wife Joanne, and their family of Ventura, CA; his step-daughter, Roberta Wilson, and her family of Dillon; and his Coffee Gang down at the Los Koritas Mexican Restaurant. Please join Chuck's family and friends in celebrating his life with a visitation on Monday, March 20th from 6 to 8pm, at the Brundage Funeral Home; and a graveside service on Tuesday, March 21st, at 1:00pm, with a reception at the Our Savior Lutheran Church after the service.

Charles Edward "Chuck" Dishno was born August 4, 1934, in Bly, Oregon. Chuck was very proud of the fact that he was 4th in his high school graduation class...of four; he like to say he was the top of the lower 25%. Although Chuck came to Dillon... View Obituary & Service Information

The family of Charles Edward Dishno created this Life Tributes page to make it easy to share your memories.

Send flowers to the Dishno family.