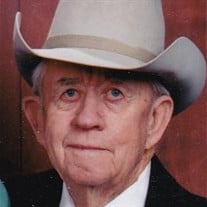 Carl N. Knox, just 4 days shy of 97 years, passed away in his home in Lima, on Valentine’s Day 2020. Carl was born in Dell, Montana, to William and Ethel (Martinell) Knox, February 18, 1923. He attended the Dell School, and then Lima High School graduating in 1941. His dad was an original cowboy who made a living catching and breaking wild horses. Dad was a chip off the old block, who had a unique touch with horses and livestock. He grew up on the ranch homesteaded by his parents, and spent his lifetime working the ranch and raising his family. Carl met and married Shirley Brown of Lima and they were married 72 years. It is more than a coincidence that he crossed over on Valentine’s Day to be with his life’s love and companion. No doubt Mom was waiting for him with her dancing shoes on. If he couldn’t talk a horse into doing what he wanted, he would try some “persuasion” to get their attention, always with a gentle but firm hand. He was also a basketball athlete who played beyond his high school days on a traveling team who challenged opponents all over western MT. He loved to tell stories of his adventures in the saddle and on the court. Carl is survived by his daughter Tana Shively of Cody WY, Son Bill (Cathy) of Dillon, 12 grandchildren, many great grandchildren, and one great-great grandchild. Carl was preceded in death by wife Shirley; his parents; sisters: Marie, Bessie, Gertie, Alice and Anna Jean; daughters: Judy, Karla and Polly Jo, and son-in-law Dan Shively. A visitation will be held at Brundage Funeral Home, Friday, February 21 from 6 to 8 PM. Services will be at the Lima Community Church February 22, at 2pm, followed by a graveside service at the Lima Cemetery. Friends and family are invited to gather at the Lima Fire Hall after services. Lima Fire Department and Ambulance or Lima Swimming Pool are suggested memorials.

Customized sympathy cards. Mailed for you.