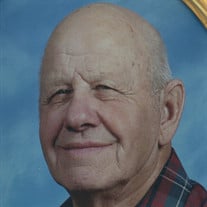 Carl W. Meier of Dillon, Montana passed away March 24, 2017, at Kindred Nursing and Rehabilitation - Parkview. Bud, as he was affectionately known, was born on August 21, 1920 in Duluth, Minnesota. In 1935 Bud and his family moved to Alaska to settle in the Matanuska Valley. He worked on the family Dairy Farm, the Civilian Conservation Corps, and served in the Army during WWII, stationed in the Pacific Theatre. After getting out of the service he drove Semi until retiring from the Teamsters in 1978. Bud married Joanne Clark on January 24, 1966. They moved to Dillon, Montana in 1978. He was a hard worker and worked until his 96th birthday. Bud was an avid bowler, traveling throughout the state competing. In the spring of 2014 he had the honor of participating in the WWII Honor Flight to Washington D.C. The most important thing to Bud was the love he had for his family and friends. Bud is proceeded in death by his mother and father Karl and Edith Meier; siblings Betty, Kenny, Bobby and Vivian; his son David Rex Meier; and grandson Christopher Hight. He is survived by his wife of 51 years, Joanne Meier; daughters, Judy McCall, Olympia, Washington, Penny Redmond, Wasilla, Alaska, Teri Meier, Dillon, Montana, Edie (Steve) Stepura, Poulsbo, Washington, Melynda (Steve) Vraspir, Winnett, Montana; nephew Kent Meier, Fairbanks, Alaska, and many more nephews and nieces; grandchildren, Brendan and Christine McCall, Amber Hight (Scott), Kirsten (Josh) Geiger, Justin and Jessica Stepura, Merissa, Emilie and Hannah Vraspir; great grandchildren, Zane, Tessa, Haley and Cooper. Memorials can be made to St. Jude Children’s Research Hospital or Shriners Hospitals for Children in Buds honor. . . . Dad . . . If I could write a story It would be the greatest ever told Of a kind and loving Dad Who had a heart of gold I could write a million pages But still be unable to say, just how Much I love and miss him Every single day I will remember all he taught me I’m hurt but won’t be sad Because he’ll send me down the answers And he’ll always be MY DAD

Carl W. Meier of Dillon, Montana passed away March 24, 2017, at Kindred Nursing and Rehabilitation - Parkview. Bud, as he was affectionately known, was born on August 21, 1920 in Duluth, Minnesota. In 1935 Bud and his family moved to Alaska... View Obituary & Service Information

The family of Carl "Bud" William Meier created this Life Tributes page to make it easy to share your memories.

Send flowers to the Meier family.