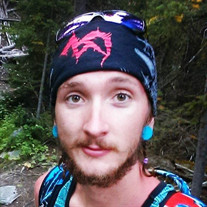 Blaise Riebe passed from this life on December 28, 2016. He is the son of Kathleen A. and Russell B. Riebe of Dillon, Montana. Blaise was born in Missoula, MT on April 5, 1993. He was raised in Salmon, Idaho where he grew to love the mountains, rivers and lakes of the surrounding area. He moved with his family to Dillon and the Big Hole in 2009. He graduated from Beaverhead County High School in 2011. Blaise was a track athlete, a Silver Medalist in both the 300m hurdles and 4X100 meter relay. He worked summers on the YCC crew at the Big Hole Battlefield while in high school. He also worked at Stageline Pizza, Kirkwood Ski Resort, and most recently for W.O.W. Services in Bozeman, MT. Blaise was easy to be around and loved his friends, family and co-workers. An avid outdoorsman, Blaise enjoyed hiking, fishing and4-wheeling with his friends and family in the Pioneer Mountains and along the Continental Divide. His passion was boarding fresh powder with his good buddies Garrett, Gabe, Buddy and brother Colton and others. He learned to snowboard at Lost Trail Powder Mountain, and was at home among friends from both states whenever he and the family visited LT. He fell in love with Maverick Mountain, and later Bridger Bowl, as the casual atmosphere and friendly people gave him the opportunity to meet many new friends. Blaise is survived by his parents Russ and Kathy, brothers and sisters Brian (Heidi), Colton, Theresa (Randy) Verzola, Melissa (Chad) Stephenson, Megan (TJ) Dietrich, and his nephews and nieces Gavyn, Dylan, Kole, Alexa, Carter, Brooke, Randy and John. His grandparents are Ray and Dalene Guidici of Dillon, and F.A. “Flick” Riebe of Missoula. He was preceded in death by his grandmother Alvina Cyr. A Rosary will be held at St. Rose of Lima Catholic Church in Dillon on Friday, January 6th 2017 beginning at 7 p.m. A funeral Mass will also be held there on Saturday January 7th, at 11:30, with a Reception following in the parish hall. In lieu of flowers, the family asks that you contribute in Blaise’ name to Catholic Social Services, the Knights of Columbus Charities, NAMI, Life Center Northwest or other family service organizations of your choosing. Our hope is that by his donation to others his spirit will enrich many more lives. He lives within all of us that knew him, and thus encourages friends and family in the hope that we will all join together again in the Kingdom of our Lord and Savior Jesus Christ.

Blaise Riebe passed from this life on December 28, 2016. He is the son of Kathleen A. and Russell B. Riebe of Dillon, Montana. Blaise was born in Missoula, MT on April 5, 1993. He was raised in Salmon, Idaho where he grew to love the mountains,... View Obituary & Service Information

The family of Blaise Philip Riebe created this Life Tributes page to make it easy to share your memories.

Send flowers to the Riebe family.