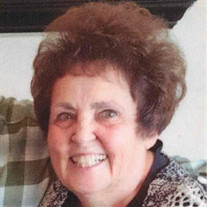 Beverly Kae Hart Zobell JACKSON – Beverly Kae Hart Zobell passed through the veil of mortality this Friday, September 24 while at her home in Jackson, Montana. Beverly Kae Hart was born May 10, 1948 at 8:27 a.m. at the LDS Hospital in Idaho Falls, Idaho. She was born to Lewis Lynn Hart and Zola Wilson and came into a loving family with an older brother, Bradley. Eleven years later, she welcomed a younger sister, Kristy, who she dearly loved. Beverly was raised in Menan, Idaho where she loved swimming in the canals with her mother and picking apples from her grandparents’ orchard. She was a good student and active in many school clubs and organizations. After graduating from Rigby High School in 1966, she attended Ricks College in Rexburg, Idaho. While there she worked at the Bank of Commerce and graduated with her Associates Degree in 1968. She attended Brigham Young University in Provo, Utah from 1968 till she graduated in 1970 with a degree in Business Education. While at BYU she did her student teaching at a high school in Roy, Utah. Following graduation, Beverly accepted a teaching position in the business department at Skyline High School in Idaho Falls, Idaho. From 1970 till 1980 she loved her job as a teacher where she taught classes in typing, accounting, general office practice, and shorthand. She lived in Menan, Idaho with her parents and sister, Kristy, and commuted to Idaho Falls. During her summers she would take classes towards her Master’s Degree at the University of Montana and stay in Missoula with her brother and sister-in-law, Bradley and Luana Hart. She cherished those summers and the memories made with Luana, who became one of her dearest friends, and her beloved nephews, Brandon and Derek. At the prompting of her aunt, Verla McCandless of Dillon, MT, Beverly came to Dillon, MT for a blind date on February 1, 1980. There she met the love of her life, Walter Ward Zobell, Jr. of Jackson, MT. Walter fell in love with Beverly’s effervescent spirit, beautiful eyes, and bright smile the first time he saw her. They courted over the next few months and became engaged in May of that year and were married October 10, 1980 at the LDS Church in Menan, Idaho. They were later sealed in 1986 in the Salt Lake City Temple for time and all eternity. After a honeymoon in the Southwest they settled in Jackson, MT. Even though she lived in rural Montana, she maintained active correspondence and communication with her family. She regularly wrote letters to her aunts, Marilyn and Gayle. These letters later turned to daily emails and phone calls to all those she loved. While living in Jackson she kept herself active in the local community by serving as a poll worker, substitute teacher at the elementary school, and being active in her church. Beverly was an active member of the Church of Jesus Christ of Latter-day Saints throughout her entire life, coming from pioneer heritage that crossed the plains and settled in Utah and Idaho. She served as Relief Society President on multiple occasions, once for over 10 years. She loved going to the LDS Temple, especially in Idaho Falls and more recently in Rexburg. Beverly’s greatest joy and greatest pride was in being a mother. Though she started her family later in life, she was blessed with two boys, Clay Ward Zobell born October 27, 1982 and Gage Hart Zobell born April 14, 1986. She cherished her sons and was always taking them to visit her family in Idaho, on school trips, and to go shopping. This love and devotion extended later in life as she was blessed with four grandchildren, ReElle Hart Zobell, Bexley Rae Zobell, Walter Ward Zobell III, and Theodore Yasuo Hart Zobell. No cheek was safe from her kisses, no eye shielded from her bright smile, and no ear denied endless numbers of stories and “I love yous.” She was anxiously looking forward to meeting her new grandson who is scheduled to be born in January. Beverly struggled with osteoporosis and other health issues in her later life. She rarely complained and continued to be a help to her husband working the ranch in the Big Hole Valley. She spent her time trying to bless others with a smile, story, phone call, or food (she was an excellent cook). With her unexpected and sudden passing she leaves behind a legacy of selfless service and love to all who she touched. She will be dearly missed and her memory cherished. Beverly was preceded in death and is now reunited with her beloved parents, Lewis Lynn Hart and Zola Wilson (Hart), older brother Bradley L Hart, and her grandparents. She is survived by her husband, Walter Ward Zobell Jr.; son Clay Ward Zobell (Anna) of Kuna, ID and their children ReElle Hart Zobell and Bexley Rae Zobell; son Gage Hart Zobell (Shalise) of Bluffdale, UT and their children Walter Ward Zobell III and Theodore Yasuo Hart Zobell; sister-in-law Luana Hungerford (Roger) of Missoula, MT; sister Kristy Coy of Rexburg, ID; sister-in-law Frances Strodtman-Royer (Rod) of Jackson, MT; and nephews Brandon (Cindy) Hart, Derek (Lori) Hart, Robert (Brittany) Coy, Chris Coy, Kade (Shay) Coy, and Dale (Caitlin) Royer. Visitation will be at 6:00 to 8:00 p.m., Thursday, September 30, at Brundage Funeral Home in Dillon, MT. Services will be held at 11:00 a.m., Friday, October 1, at the LDS Church in Dillon, MT. A luncheon will follow the services. Beverly dearly loved and missed her home in Idaho, and at her wishes, she will be buried at the Annis Little Butte Cemetery near Menan, ID on Hart family plots next to her parents. A graveside service will be held at the Annis Little Butte Cemetery on Saturday, October 2 at 1:00 p.m. All are welcome to attend though it is requested you bring your own seating. Arrangements for the visitation and funeral services are under the direction of Brundage Funeral Home with arrangements for the graveside service and burial under the direction of Eckersoll’s Funeral Home of Rigby, Idaho.

The family of Beverly Kae Zobell created this Life Tributes page to make it easy to share your memories.

Send flowers to the Zobell family.