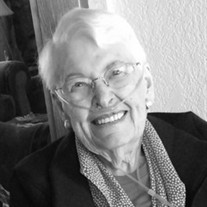 Betty Jo Holland, 92, of Dillon, Montana, died of natural causes, June 25, 2015 at the LEGACY Assisted Living facility, in Dillon surrounded by her family. She was born December 15, 1922 in Thompson Falls, Montana to John and Irene Severson. She attended school in Hot Springs, MT.  In 1942 she married Ed Borders, and they had Elden C. (Bub) Borders, shortly after his arrival, Ed was killed in WW2.  In 1947 Betty Jo married Thomas J. Holland, they had Dan, Tom, Ken & Mary Jo. They ranched and raised their family on Camas Prairie, later moving to Plains, Lima, Dillon and Malad, ID, where they were closer to their children and grandchildren. Betty Jo retired after working 15 yrs at the Little Bitterroot Special Services in Hot Springs and Plains, where she grew very attached to the Disabled Clients. She had a great love for the 4-H program, and served as a leader for 35 years, and was very instrumental in starting the 4-H Kitchen that still operates today during every fair. She was a great fan and supporter to anything her Kids or Grandkids were involved in taking her to numerous sporting events especially Rodeos throughout the years. She had the ability to bring love and warmth to everyone she knew, and she will be deeply missed. Betty Jo was preceded in death by her parents, John & Irene Severson, Sister, Joy Ann Buck, Husband, Thomas J. Holland, 2 sons, Elden C. (Bub) Borders & Kenneth Wylie Holland. Betty Jo is survived by sons, Dan Holland, J.Tom Holland (Patti), daughter, Mary Jo Davis (Kelly), Daughter-in-law, Vila Holland Krug. Grandchildren, Mandi Farstvedt (Ellis), Tyler Holland (Christina), Jordan Holland, Jana Davis, Lindsay Davis, Kiely Jo Davis, Justin Borders (Jamie), Erin Montgomery and Scott Martin. Great-grandchildren, Averi, Logan, John, Mayson, Sophia, and numerous nieces and nephews. Our family would especially like to thank Janet and Yogi Fjeseth & family for the unconditional love they showed our Mom. For all the trips to the grocery store for this and thatâ€™s especially A & W Root Beer to being a phone call away and always stopping in for a visitâ€¦.she loved you all! Friends are asked to join the family for a Memorial Service at 11:00 a.m. on July 6,  2015 at the Lone Pine Hall for a Celebration of Betty Joâ€™s life. Burial at the Murray Cemetery in Lone Pine, MT. Lunch and refreshments will follow the burial. In lieu of flowers the family suggests you give to the Sanders County 4-H Council, 2504 Trade Winds Way Suite 1 B, Thompson Falls, MT 59873 In memory of Betty Jo Holland. A special thank you to Kevin Button, Monica Martinez, Vicky Matamoros and the entire staff of the LEGACY of Dillon and to the Barrett Memorial Hospice for all their wonderful care and support. $(document).ready(function(){ });

Betty Jo Holland, 92, of Dillon, Montana, died of natural causes, June 25, 2015 at the LEGACY Assisted Living facility, in Dillon surrounded by her family. She was born December 15, 1922 in Thompson Falls, Montana to John and Irene Severson.... View Obituary & Service Information

The family of Betty Jo (Severson) Holland created this Life Tributes page to make it easy to share your memories.