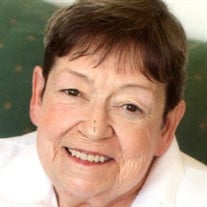 Audrey Beryl (Remely) Roberts Audrey Beryl (Remely) Roberts of Dillon passed away on Sunday, March 24, 2019 at Barrett Memorial Hospital after a short illness. Funeral services will be held at Brundage Funeral Home in Dillon at 10:30 a.m. on Monday, April 1, 2019 with burial to follow at Mountain View Cemetery. Beryl, as she was known to family and friends, was born December 23, 1939 in Winsor, Ontario, Canada to Ivan and Dorothy (Manvell) Remely. Beryl emigrated to the United States with her family first to Niagara Falls in 1949 and ultimately to the Grasshopper Valley of Montana in 1950. She graduated from Beaverhead High School in 1956. Beryl married Thomas Thiel in Dillon on December 22, 1958. Together they had four children, Kim, Mike, Matt and William. The family moved to Helena in 1967. Tom & Beryl were divorced in 1978. Upon moving to Helena, Beryl began a career in nursing that had her working as the office nurse for Dr. Robert Little, in the ER at Saint Peter’s Hospital and finally as a safety nurse for Ashgrove Cement. In Helena, she was active in Soroptimist and in several bridge clubs. Beryl married Dick Roberts in Dillon on August 21, 1993. After moving to Dillon, she worked until her early 70’s for the Parkview Nursing Home. She also was active in the Parkview Auxiliary, helped with the annual Festival of Trees, and enjoyed playing bridge. She and Dick enjoyed traveling annually to the NFR in Las Vegas aboard the “nutty bus” with friends for many years as well as travels to England and Wales, Branson, Missouri and her childhood home in Ontario. Beryl loved the challenge of growing tomatoes each summer in Dillon and was quite happy with her flower gardens as well. Beryl was well read and seldom seen without a book. She loved visiting a bookstore and if you accompanied her, then you planned for a long visit. Beryl’s children did not provide her with a bevy of grandchildren so as her two granddaughters aged into adulthood, she turned to her children’s pets. Beryl traded cat pictures with William and Mike and was always thrilled when the grand dogs came for a visit with Kim or Matt. Beryl’s cat, Spock, will be rehomed in Missoula with a family friend. Beryl was preceded in death by her parents, Ivan and Dorothy and her brother, Bradley. Beryl is survived by husband Dick; her children Kim (Dan) Schaaf of Great Falls, Mike (Carrie) Thiel of Kalispell, Matt Thiel of Missoula, and William (Tanya) Thiel of Perth, Australia. Her grandchildren Katie Tobel Burns of Santa Fe, New Mexico and Marissa Davis of Phillipsville, California; and two great grandchildren. Her siblings Barry (Helen) Remely of Bozeman, Barbara (Liam Bennett) Cotton of San Luis Obispo, California, and Brian (Joni) Remely of Dillon. She is also survived by numerous cousins, nieces, nephews and dear friends who will all miss her immensely.

The family of Beryl Roberts created this Life Tributes page to make it easy to share your memories.

Send flowers to the Roberts family.