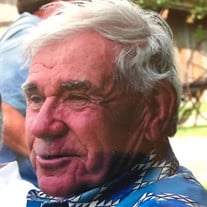 Bennett Alvin Owen, 88, of Dillon passed away Wednesday, September 26th, 2018 at his home with daughter, Georgia “Georgie” and his wife by his side. He was born to Alvin and Lois Owen in Butte, MT on December 7th, 1929. Bennett attended school in Armstead and later Dillon after his family relocated their business to Dillon. He joined the Marines in 1945 and after two years of service returned home to help his father run his trucking business. After his father’s passing, he continued to operate Owen Trucking hauling talc for 45 years until his retirement in 1997. He took pride in continuing the business started by his father and working with his sons. One of his passions was for snowmobiling and blazing trails in the Grasshopper Valley. There were few who could keep up with Bennett on his snowmobile, as made evident by him and his team taking first place in a race in Idaho. Bennett married Norah Richardson on August 7th, 1949 and together they had five children: Glen, Georgia, Peggy, Trisha and Curt. In 1992, he married Dyanne, spending the last years living between their homes in Polaris and Dillon. He was preceded in death by his parents, son Glen, and grandson Ryan Vialpando. He is survived by his wife, Dyanne; brother, Leroy; children Georgia Owen, Peggy (Bob) Marquart, Trisha (Wayne) Vialpando and Curt (Natalie) Owen; stepchildren Carrie (Gerry) Goody and Paula (Russ) Fisk, as well as many grandchildren, nieces, nephews and his faithful dog “Po”. Bennett will be remembered for his quick smile and his love of his family, sharing a special bond with his grandsons Mark and Blake. He spent many days watching the Atlanta Braves with Mark and attending or listening to the Dillon Beavers games cheering them on. Memorials may be made to the Shriner’s Hospital or donor’s choice.

Bennett Alvin Owen, 88, of Dillon passed away Wednesday, September 26th, 2018 at his home with daughter, Georgia &#8220;Georgie&#8221; and his wife by his side. He was born to Alvin and Lois Owen in Butte, MT on December 7th, 1929. Bennett attended... View Obituary & Service Information

The family of Bennett Alvin Owen created this Life Tributes page to make it easy to share your memories.

Send flowers to the Owen family.