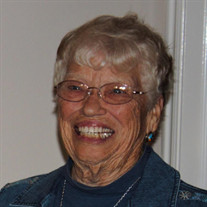 Barbara Ann Nitsche died peacefully at her home in Dillon, MT on Monday, June 15, 2020 at the age of 91. Her last days were spent at home with her family and an adorable assortment of dogs. Born in Honolulu Hawaii on Dec 19,1928, Barb witnessed incredible changes to the world in her 91 years. At the age of 12, two days after the bombing of Pearl Harbor, her mother, Mary Hudson feared for her safety and sent her to live with her Aunt Ruth and Uncle Jack Evers in Vallejo, CA, where she would go on to attend high school and graduate school. As her family will tell you, she approached life will a smile and a positive attitude. She earned a business degree and began work as a secretary shortly after graduating. In 1946, she began working as a bank teller and gradually worked her way up to the position of Loan Officer. She enjoyed her career and made many friends over her nearly 45 years in the business. In 1953, Barbara married the love of her life and fellow comedian, Paul Nitsche, who she met while on a cruise with her crew of girlfriends. They met in Honolulu where Paul was stationed. Together they would have 4 children. Cathy, Dan, Mike, and Mark were blessed to call Barbara their mom. After the birth of Cathy, Barb and Paul moved to San Diego were they would build their dream home and raise their family. There was no lack of adventure, love, humor, dogs, cats, horses, pigs, chickens, roosters, 4H, Little League, Horse Shows… they lived an abundant life. They had a magical childhood. Barb was the kind of mom that held life-long relationships with all of her children and became a beloved grandma, and then great-grandma to kids that treasured her kindness, wit, easy-going attitude and strong will. Paul and Barb retired to Montana and loved to travel. She especially loved to cruise in their motorhome. It was during one of these trips to southwest Utah, that they fell in love with the amazing red mountains and unique landscape. They moved to Kayenta, UT, and built their second dream home. They lived there happily for 18 years, then decided to move back to Montana to be close to family. Cooking and sharing great food, reading, old movies, playing card games, gardening, antiquing, and loving on dogs were on her huge list of hobbies, but she was also rather adventurous, and never turned down an opportunity to do something everyone else thought might be a bad idea, such as getting on a snowmobile at the age of 89. If you were lucky enough to know her, you know that her smile was magical. It lit up her face and the world around her. Her personality was vivacious, and her laugh contagious. She was simply a wonderfully fun and loving person, and she will be terribly missed. Barbara was preceded in death by her husband, Paul Nitsche. She is survived by her children Cathy (Steve) Cottom, Dan (Linda) Nitsche, Mike Nitsche, and Mark (Joe) Nitsche, her grandchildren, Lindsey (Mike) Clarke, Travis (Emily) Cottom, and Trent (Ashly) Cottom, Sarah (Matt) Meade, Karissa Nitsche, Kris Nitsche and Mia Nitsche, and her great-grandchildren Cooper and Chase Clarke, and Philip and William Cottom, and Austin and Drew Cottom. Barbara was so well cared for by many wonderful people in the Dillon community, and the family is thankful to you all. A funeral service is not planned at this time. Memorial contributions may be made to Beaverhead Ambulance, Beaverhead Animal Shelter, Barrett Home Hospice, Barrett Hospital Foundation, or a charity of your own choice.

Barbara Ann Nitsche died peacefully at her home in Dillon, MT on Monday, June 15, 2020 at the age of 91. Her last days were spent at home with her family and an adorable assortment of dogs. Born in Honolulu Hawaii on Dec 19,1928, Barb witnessed... View Obituary & Service Information

The family of Barbara Ann Nitsche created this Life Tributes page to make it easy to share your memories.

Send flowers to the Nitsche family.