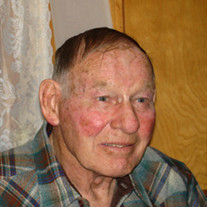 Dillon native and longtime resident Arley Clark McLaren passed away at Barrett Hospital and HealthCare August 16th, 2014 at age 86. Born May 8th, 1928 to John H. and Gladys (Rhodes) McLaren, Arley was part of a large and boisterous family, well known throughout the Beaverhead. He graduated from BCHS in 1947 where he lettered in basketball and football and was a member of the state class â€œBâ€ Championship basketball team of â€™46. When he wasnâ€™t on the court or on the field he could be found helping his brothers and father in the Blacksmith shop. Some of his fondness memories were of the summers he spent haying and working horses on Dwight Harrisonâ€™s ranch. He married Carol Giudici in 1950, a year later they moved to Pocatello, ID where he began his apprenticeship and later becoming a journeyman plumber. He worked on various jobs throughout the area including the A.E.C facility at Arco. They returned to Dillon to be closer to family following the death of his father. For several years he ran the Dillon-Wisdom Stage route, often accompanied by his wife and youngest daughters. In 1975 he purchased Hignight Plumbing with a partner. He eventually became sole owner, which he renamed McLaren Plumbing. He continued to run McLaren Plumbing for 25 years until his retirement in 2004. His family enjoyed his colorfully worded tales of hunting, fishing, mining and logging camp, almost as much as he enjoyed telling them. He loved his wife, family, bowling and watching bull riding with his sister Cleo, horses, dogs, coffee, whiskey, steak, candy, Montana high school and college sports, and John Wayne movies. He served as a Master Mason in good standing of Dillon Lodge No. 16. He is survived by: his high school sweetheart and wife of 64 years, Carol (Giudici) McLaren; daughter, Susan McLaren and her children, Kimberly (JC) Youngquist and Eric (Jordan) Dolan; son, Richard (Charee) McLaren and their daughters, Summer Bourassa and Serena (Steve) Zareski; daughter, Christine (Robert Kailey) McLaren; daughter, Amanda (Dennis) Morton and their daughter, Morgan; brother, Clyde McLaren; sister, Nellie (Ray) Quilici; brother-in-law, Phillip R. (Dalene) Guidici; 12 great grandchildren, and numerous nieces and nephews. He was preceded in death by: parents; siblings, George, Walter, David, Dorothy, Jack, Cleo, Arthur, Robert (Bobby), and Roy. Funeral services will be held Thursday the 21st at 10:30 at Brundage Chapel in Dillon, presided by the Reverend Sue Eades. Graveside services to be conducted by the Masonic Lodge. $(document).ready(function(){ });

The family of Arley Clark McLaren created this Life Tributes page to make it easy to share your memories.

Send flowers to the McLaren family.