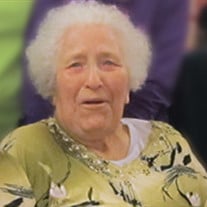 Stella Davenport, 96, passed to the great garden in the sky on Saturday, February 22, 2014 in Dillon, Mt. She was born on July 19, 1917 to Joseph and Cecilia (Kukrall) Kubal in Enid, Mt. She was raised on a dry land farm near Enid with her younger sister, Grace, through the depths of the Depression. Stella attended school in Enid and Lambert, graduating in 1936. Moving to Anaconda, Mt. to work as a housekeeper, she then worked at the WPA daycare, Montgomery Ward, and Intermountain Transportation. In Anaconda, she met Marion Davenport, and they married in 1947. In the early 1950â€™s, they moved to Patterson, Idaho, and, finally, to Dillon, MT. During this time they had two boys, Gene and Darryl. In 1956, they bought the house at 107 West Park where Stella would live for over fifty years. Marion passed away in 1958, leaving Stella with two young boys to raise. After the boys were old enough to come home after school without destroying the house, she worked at Mountjoy Flowers, and at Warnerâ€™s Foods and Davis Electric as a bookkeeper. Her passion was gardening and her flower beds. She was active in the garden clubs in Dillon and a frequent exhibitor at the Dillon Fair. She was a true daughter of the depression, raising her own garden and chickens, canning, freezing, making do with what she had available. Stella was a collector, especially antiques and rocks, crafter, and seamstress. She is survived by her son and daughter-in-law, Gene and Loralee, of Whitehall. She has three grandchildren, Julie (Adam) Wenz  of Kalispell, Catherine Davenport of Phoenix, Az, and Richard (Kristi) Davenport of Columbus, MS. She has five great-grandchildren, Rachel and Christopher of Kalispell, Grace of Phoenix, and Eva and Charlee Beth of Columbus. Other survivors are sister-in-laws, Gladys Davenport and Lois Holter, and numerous nieces and nephews. She was preceded in death by her parents, husband, Marion, son Daryl, father and mother-in-law, Henry and Carrie Davenport, sister and brother-in-law, Grace and Charlie Allingham, and brother-in-laws, Floyd, Richard, and Glenn Davenport. There will be a visitation on March 10th starting at 10 AM at Brundage Funeral Home with a prayer service at 11 AM then Mass of the Resurrection will be celebrated at St. Rose of Lima Catholic Church at 12:10 PM.  Memorial contributions may be made to St. Rose of Lima Catholic Church or a charity of the donor's choice. $(document).ready(function(){ });

Stella Davenport, 96, passed to the great garden in the sky on Saturday, February 22, 2014 in Dillon, Mt. She was born on July 19, 1917 to Joseph and Cecilia (Kukrall) Kubal in Enid, Mt. She was raised on a dry land farm near Enid with her younger... View Obituary & Service Information

The family of Anna Stella (Kubal) Davenport created this Life Tributes page to make it easy to share your memories.

Stella Davenport, 96, passed to the great garden in the sky on...