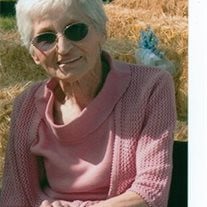 MELROSE ~ Ann Kearns passed away on April 25th at the age of 90.   She was born in Salmon, Idaho on March 1, 1925 as the second of five children of Jack and Slava Jakovac. Later, she called Melrose, Montana home when she moved to the Kearns Ranch to join her husband Jack. It was here where she raised her four children whom were her greatest love.   Ann loved ranch life, working tirelessly to make sure the cows were taken care of and the help was well fed. Throughout her life, she particularly enjoyed calving season when she could watch the newborn calves running and jumping through the field.  Even with the inclement weather common during this time of the year, she was never far from the fields. She often said the best improvement in calving season was the introduction of warm outdoor clothing for the snowmobilers so she finally could wear something warm, water repellent, and have it not weigh 40 lbs!   Ann lived a busy life both on and off the ranch, sharing her many talents with the local community. She loved teaching children and was a school teacher in Melrose for a number of years before the demands of being a mother and helping with the ranch operation become too time consuming.   Even so, she still found ways to live her joy by teaching kindergarten in her home when there were enough kids, substituting at the local school, and teaching bible study classes. Based on the comments of former students who still stopped in to visit her 40 years later, she was a great teacher.   Her enjoyment of life manifested in many ways including her passion for music and love to dance.  She played the piano and guitar at home and was the longstanding organist at the  Catholic Church in Melrose. Throughout the years there were always children sitting in front of the piano in the den of her home learning to play a tune. Annâ€™s passing leaves us all with memories of a life well lived.  She shared with us the traditions of her parents, including making povitica and sarma, while teaching us all that life is meant for living. Long will the memories of her cartwheels, dressing up as the Easter Bunny to hide eggs, legendary bedtime stories, and quality time spent baking cakes and pies to share with friends and neighbors fill our hearts.   She is survived by her sister Teresa Guay, of Las Vegas, her children Bob (Debbie) Kearns, Debra (Kevin) Lombardozzi, Jim (Susan) Kearns, and Judy Kearns (Larry Drake).  She is also survived by her 12 grandchildren Lacey (Ed) Reinhardt, Jenifer Kearns (Brad Elser), Andi (Steve) Struznik, Jake Kearns (Jenny Pettit), Joel (Alicia) Kearns, Kelsey (Ryan) Daniels, Lane Kearns, Danica Lombardozzi (John DeCoste), Erika (Ryan) Harvey, Patrick, Austin, and Katie Kearns, 10 great-grandchildren, and numerous nieces and nephews.   She was preceded in death by her parents, Jakov and Slava Jakovac, her brother Tihomil, her sisters Mary and Katherine and the dear members of the original Melrose Birthday Club.   A Funeral Mass will be conducted  1PM  Thursday, April 30th at the St. John The Apostle Catholic church of Melrose  with Fr. Pins presiding. A reception will follow at the Melrose School Auditorium. Great-grandchildren: Chase Fitzpatrick, Haden Struznik, Brendan Struznik, Matt Reinhardt, Makaylyn Reinhardt Parker Harvey, Ryder Harvey, Tayler Harvey KC Daniel, Jackson Kearns Memorial donation can be made in Annâ€™s name to The Hospice of Barrett Hospital 600 MT. Hwy 91 South  Dillon, Montana   59725 Condolences can be made at www.brundagefuneralhome.com $(document).ready(function(){ });

MELROSE ~ Ann Kearns passed away on April 25th at the age of 90.   She was born in Salmon, Idaho on March 1, 1925 as the second of five children of Jack and Slava Jakovac. Later, she called Melrose, Montana home when she moved to the Kearns... View Obituary & Service Information

The family of Ann Jakovac Kearns created this Life Tributes page to make it easy to share your memories.

MELROSE ~ Ann Kearns passed away on April 25th at the age of...

Send flowers to the Kearns family.