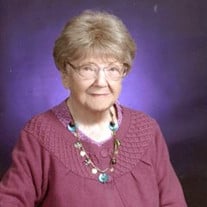 Alice Helen Ryan was born September 21, 1920 in Erie, PA to Richard Walter and Frederika Carolina Miller Kissman.  Alice died peacefully in Dillon, Montana on D-Day, June 6, 2015.  She was one of 9 children, all who have preceded her in death.  She married Paul Earnest Schnabel in Erie on September 10, 1943.  Their daughter, Janet (Schuetz) of Dillon, was born in January 1948.  Paul died of a massive stroke nine months later at the age of 29.  Alice then married her second husband, Donald Earl Ryan in Erie on December 1, 1951.  Their daughter MaryEllen (Schmidt) of Elizabeth, Indiana, was born in October 1954.  Alice will also be missed by her beloved son-in-laws: Ken Schuetz of Dillon, MT and Chuck Schmidt of Elizabeth, IN; and several nieces and nephews. Alice worked from age 11 various survival jobs through the Great Depression.  Paul and she opened their own successful Flower Shop in Erie which she continued to operate after his death.  She then spent years being a wife and mother.  During this time she taught Sunday School, organized Vacation Bible School; volunteered at school, and worked for political candidates.  Later she worked for the Erie County Voter Registration Office, where she retired in 1983. Alice thoroughly enjoyed talking about politics, Rod Stewart, opera, Bon Jovi, MSNBC, black cows, milk chocolate, slot machines, shopping, camping (especially at Yellowstone) and Godâ€™s nature.  Her gift of gab will never be forgotten by those she touched.  She could and would talk to anyone about anything.  Her family and friends were enamored and awed by her vast knowledge and varied interests, her keen wit and zest for life, and her ability to flirt even at age 94.  She was an avid reader and listener of current events, and loved being a Democrat!  She always had time to talk and time to listen. A memorial service and Celebration of Life will be held at The Legacy community building, 1000 S. Hwy 91 on Tuesday, June 30 at 3:30 p.m.; Pastor Karen Disney officiating.  Her cremated remains will be taken back to Erie, in August, and placed next to her husband, Donald, who has been waiting for her since 1999.  In lieu of flowers, memorial gifts can be designated to purchase a bench for JC Park for all to enjoy; and for all to remember this remarkable â€˜youngâ€ woman.   $(document).ready(function(){ });

Alice Helen Ryan was born September 21, 1920 in Erie, PA to Richard Walter and Frederika Carolina Miller Kissman.  Alice died peacefully in Dillon, Montana on D-Day, June 6, 2015.  She was one of 9 children, all who have preceded her in death.  She... View Obituary & Service Information

The family of Alice Helen (Kissman) Ryan created this Life Tributes page to make it easy to share your memories.