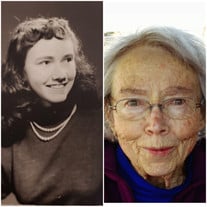 Alicejane Carkeek Fowler, 85 Alicejane passed away on January 22, 2020 at Pioneer Care and Rehabilitation Center in Dillon, Mont. She made the journey in the loving embraces of family and friends. Alicejane, also known by some as "Aj," and by others as "Corky," was born on June 12, 1934 in Butte, Mont. to John Carkeek and Mildred McCawley. She had two sisters: Jeanne (Pete) Bigley and Lois (James) Schmitt, who have all preceded her in death. Music was always an essential part of the sisters’ lives. Corky played the cello and piano, Lois the violin and Jeanne the piano. Early in their lives Jeanne and Lois played professionally; Corky chose to prepare for a teaching career. From her beginnings Corky was shy and very private, refusing to go to school. Gradually she learned to accept her classmates. Her zest for life began to blossom as she energetically twirled double batons as head majorette in the Butte High School Marching Band. She expanded her connections with Butte High by playing the cello in the school orchestra. She and her family would share their love of the outdoors by spending many fun-filled hours fishing small streams within driving distance of home – usually on over-nighters. After graduation in 1952 she continued to pursue her love of music by attending Montana State University (now U of M) in Missoula with aspirations to teach. She earned her bachelor of music in 1956. While attending school she met her life-long friend, Frank Fowler. They married in Butte in 1957. Their first adventure took them to Sullivan Lake Ranger Station in Washington. In the following years they bounced around to various U.S. Forest Service assignments in Washington, Idaho and Montana. Many of their early assignments were in back-country areas. Each was a new adventure. Sometimes there was only a generator for electricity and a crank telephone for personal communication and Corky’s connection to music was primarily through a phonograph, but she loved it all, and joyfully joined with Frank in raising their family. Their last move was to Dillon where she taught UM Western students how to teach string instruments in rural schools. She played cello in the Dillon Orchestra and in small ensembles. Also of great satisfaction to her was teaching private lessons. While she usually did not have a large number of students, she never tired of imparting her passion for music or of witnessing the growth students displayed as they struggled to learn to play the cello. Corky had an abiding appreciation for nature. In her younger years she eagerly pursued hiking and camping and occasionally horseback riding. As the years passed, her attention turned more to bird-watching. She always found time to stop, watch, and listen to her beautiful winged friends. She is survived by her beloved husband of 62 years, Frank Fowler; son Chris (Rachael) Fowler; daughter Jody (Eddy) Dallaserra; grandchildren Ethan (Rachael) Dallaserra; Kira Dallaserra; Sean Fowler and Great Grandson Logan Dallaserra, as well as her nieces and nephews whom she loved dearly. A memorial service is planned for January 29 at 1:00 pm at Grace United Methodist Church. A guest book is online at www.brundage funeral.com. Memorials may be made to a charity of your choice in Alicejane’s name.

Alicejane Carkeek Fowler, 85 Alicejane passed away on January 22, 2020 at Pioneer Care and Rehabilitation Center in Dillon, Mont. She made the journey in the loving embraces of family and friends. Alicejane, also known by some as "Aj," and... View Obituary & Service Information

The family of Alice Jane Fowler created this Life Tributes page to make it easy to share your memories.

Alicejane passed away on January...

Send flowers to the Fowler family.