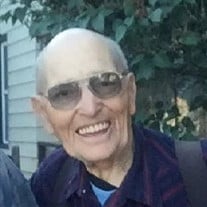 Albert passed away unexpectedly Friday, August 16 following a brief illness. Albert Paul Trafelet was born March 17, 1935 in Valier, Montana to Albert and Zella Trafelet. He was the eldest of five children. Albert spent his childhood helping on the family homestead west of Dupuyer. He attended the Bisnett School during his elementary years and graduated from Valier High School in 1953. In 1955 he moved to Dillon where he worked at the P & O ranch as a cowboy. In December of 1956 he met Lyla Henrie at the Diamond Bar Inn on New Year’s Eve in Jackson, Montana. In September of 1957 they were married in Dillon. Together Albert and Lyla raised four children, Fred, Rich, Ray and Reba. Albert was a potato farmer for Skone and Conners for 22 years after which time he was employed by Barrett Minerals for the next 20 years. Albert taught all four of his children along with numerous nieces and nephews to drive in his 1946 Willy’s jeep. As an outdoor enthusiast, Albert took his children hunting and fishing along with numerous camping trips to Bloody Dick and the Big Hole areas. As empty nesters, Albert and Lyla developed their love of riding four-wheelers and snowmobiling, they also continued to camp and spend time outdoors. Albert was an avid snowmobiler and an active member of the Beaverhead Sno-Riders until his passing. Albert was well known for his friendly hellos on his frequent walks around town. Albert is survived by sons Fred of Valier and Richard of Dillon as well as his favorite daughter Reba (Rusty) Hoff of Florence. He is also survived by 7 grandchildren and 8 great grandchildren. Albert was preceded in death by his wife of 57 years Lyla and his son Ray. Public viewing for Albert will be Wednesday, August 21 from 5:00pm-8:00pm at the Brundage Funeral Home in Dillon, MT. Funeral services for Albert are Thursday, August 22 at 2:00pm at the funeral home, interment at Mountain View Cemetery with a reception to follow at the LDS church. Donations may be made to either Beaverhead Sno-Riders or the Beaverhead EMS.

The family of Albert Paul Trafelet Jr created this Life Tributes page to make it easy to share your memories.

Send flowers to the Trafelet family.