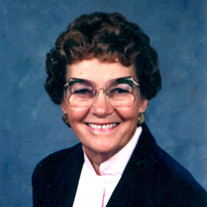 Agnes Ollie Dons Eberline Melton February 27, 1920 – August 11, 2017 Agnes Ollie Dons Eberline Melton, 97, passed away Friday, August 11, 2017 at Barrett Hospital. Ollie was born in Goshen, Idaho on February 27, 1920 and spent her early years in Shelley, Idaho, but attended grade school in Dillon, Montana. She helped her parents, Hans and Hanna Dons run the Mill Point Hotel from 1929 through 1936. Ollie married Loren M. Eberline on December 19, 1936, and they lived for several years in a small log cabin they built in Bannack, which they later sold for $50. It was moved to Dillon where it still stands today. Ollie and Loren worked hard together, to make a good life for themselves and the four sons they were blessed with, Loren Lee, Richard Dan, Randall Dons, and Dale Wayne. Ollie was a farming/ranch woman of many and varied talents, but her life and talents were focused on her family and friends and serving them. She loved to have company and cook for them. Loren died in 1983. She is a member of the Church of Jesus Christ of Latter Day Saints and she found much satisfaction serving in whatever capacity she was able to in the church, and was very conscientious and meticulous in all that she did. She married James Melton June 1, 1991 and they had some good years vacationing, working and enjoying life together before Jim died in 2016. Ollie is survived by four sons, Loren Lee Eberline (Rita) of Dillon, Richard Dan Eberline (Jenny) of Twin Bridges, Montana, Randall Dons Eberline (Robin) of Soldotna, Alaska, and Dale Wayne Eberline, 13 grandchildren, and many great-grandchildren, and it brought her great joy to have any of them come to visit her.

The family of Agnes Olive "Ollie" Melton created this Life Tributes page to make it easy to share your memories.

Send flowers to the Melton family.