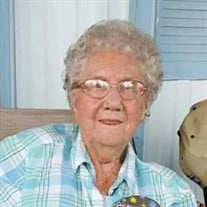 Grandma Great was born March 8th, 1922 to Oscar and Myrtle (Wilcox) Rose at their home in Dagmar, MT. Although there has been much debate on the actual year of her birth and has turned into a running family joke as to her real age. There are many documents stating she was born in 1921, 1922, or 1923, Grandma Great will state that she was born in 1921. Although her birth certificate says she was born in 1922. So, she could be either 98, 99, or 100, but we will never know. She did say she was going to live to be 100, so she could very well have been turning 100. Grandma Great grew up in Dagmar/Plentywood, MT on her families' homestead. She was the 8th child out of 13 children. In 1940 she married Ludvig (Louie) Erichsen and together they had 8 children, Andrew Erichsen, Kenneth Erichsen, Larry Erichsen, Wayne (Sandy) Erichsen, Leroy Erichsen, Deeann (Erichsen) DuBois, Vaneasa (Erichsen) Buell, Isabell (Diz) Erichsen (George) McAlpin, and infant David who did not survive. They later divorced, and in 1960 she moved to Dillon, Mt where in 1982 she met and married Mike DeMoss. She worked in the service industry as a cook in Skeets Cafe, The Truck Inn and later at Western Montana College (The University of Montana Western). She enjoyed cooking, baking, fishing, spending time outdoors, and gardening, but her biggest enjoyment was her children, grandchildren, and great grandchildren which she helped raise and that includes all her extended children, grandchildren and great grandchildren. She always had a friendly smile and hello for anyone she came across as well as unconditional love for all. Grandma Great passed away peacefully in her home Tuesday, October 13th, 2020 surrounded by her family. She is survived by her sons Kenneth, Wayne (Sandy), Leroy and many many grand/great/great-great grandchildren. She is preceded in death by her children David, Vaneasa, Diz, Deeann, Andy, and Larry. Her daughter in laws Carol and Dottie. Her son in law Jack Buell. Her Husband's Louie and Mike. Her granddaughters Echo, Michelle, and Dawn. Her Parents Oscar and Myrtle. Her 12 siblings Earl, Ethel, Ervin, Ella, Elmer, Crynus, Maybell, Buddie, Betsy, John, Tony, June, and numerous nieces and nephews. There will be a service held October 23rd, 2020 at 1 PM for family only, with graveyard services at 2 PM for anyone who would like to come. There will be visitation at Brundage Funeral Parlor October 22nd between 5 PM - 8 PM open to all. Due to Covid there will be no reception, but all are welcome to visit grandmas throughout the day and evening. If anyone would like to make a donation, we ask you make donation in grandmas name to the Veterans Hospital, Childrens Hospital or the Animal Shelter.

Grandma Great was born March 8th, 1922 to Oscar and Myrtle (Wilcox) Rose at their home in Dagmar, MT. Although there has been much debate on the actual year of her birth and has turned into a running family joke as to her real age. There are... View Obituary & Service Information

The family of Addie Elma DeMoss created this Life Tributes page to make it easy to share your memories.

Send flowers to the DeMoss family.