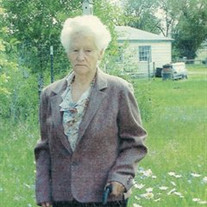 Ada Maud (Brothers) Ingram Ada Maud (Brothers) Ingram passed away February 18, 2015 at her home in Dillon, surrounded by her family. She was 100 yeas old. She was born October 6, 1914, in Marysville, Idaho to Walter and Louise (Chambers) Brothers. She had three sisters and one brother. Her family moved to the Centennial Valley where her parents worked on area ranches. Ada attended school in Lima. She married Ralph Richard Jones and they homesteaded on Jones Creek in the Centennial Valley. They had six children. After divorcing Ralph, she moved to Dillon where she resided for the remainder of life and where she became one of the best cooks in Beaverhead County. She cooked for several crews on area ranches.  She also cooked for Skeets Murry at Skeet's Cafe, Luanna Lyons at The State Lounge and the Lions Den. While working on one of the ranches, she met and married Vance Robbins Ingram. Together they had three children. Ada loved quilting, knitting, crocheting, doll making, gardening, making special gifts for her family and spending time with her family and friends. She will be greatly missed by all that knew and loved her. Ada was proceeded in death by her parents, her husband; Vance Robbins Ingram, sisters; Perssis Joslin and Eva Johnson, brother; George Brothers, children; Maud Jones, Ralph Jones and Helen Prosenick and daughter-in-law Terry Jones, grandchildren; James Jones, Timothy Prosenick, Debbie Prosenick, Brandy McCord and Delmar Rowe Jr. And many treasured friends. She is survived by her sister; Katie Standridge, children; Leland Jones, Beverly (Delmar) Rowe, George (Faye) Jones, Mildred (Bill) Struthers, Maurine (Lee) Hawks, Lauretta McCord, Vance Rex (Dorthy) Ingram and her special son-in-law Joe Prosenick; 35 Grandchildren; 72 Great Grandchildren, 38 Great-Great Grandchildren and two of many very Special friends Greta Chaffin and Kevin Buttons and family.  Memorial contributions may be made to Barrett Home Health and Hospice or a charity of the donorâ€™s choice.  There is a graveside service scheduled for Tuesday, February 24th at 10 AM at Mountain View Cemetery. $(document).ready(function(){ });

The family of Ada Maud (Brothers) Ingram created this Life Tributes page to make it easy to share your memories.